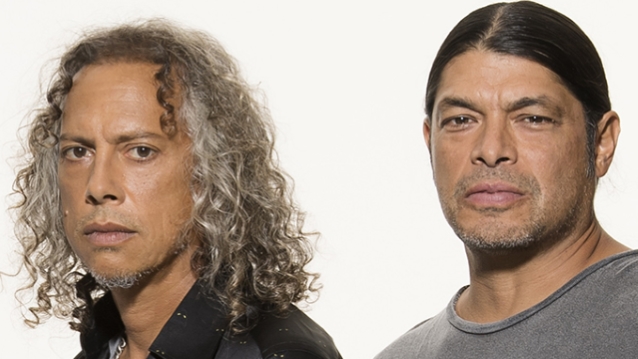 According to Cosmo Music, METALLICA members Kirk Hammett and Robert Trujillo, along with their good friends Whitfield Crane (UGLY KID JOE) and Joey Castillo (QUEENS OF THE STONE AGE, ZAKK SABBATH) will perform at Cosmopolitan Music Hall at Cosmo Music in Richmond Hill, Ontario, Canada on July 26. Dubbed THE WEDDING BAND, they will play classic covers from bands like AC/DC, BLACK SABBATH, Billy Idol, and more.

Tickets go on sale on Thursday, June 27 at noon EST / 9 a.m. PST. VIP tickets (limited to 100) are priced at $300 and include a pre-show meet-and-greet with Hammett, a signing poster ("It's Alive! Classic Horror And Sci-Fi Art From The Kirk Hammett Collection", designed by Brian Ewing), a limited-edition Kirk Hammett Monster Mash Up Funko Pop! figure and two special-edition guitar picks in a commemorative gift bag. General admission tickets (limited to 100) are priced at $200.

As previously reported, The Royal Ontario Museum in Toronto will host "It's Alive! Classic Horror And Sci-Fi Art From The Kirk Hammett Collection" from July 13, 2019 to January 5, 2020.