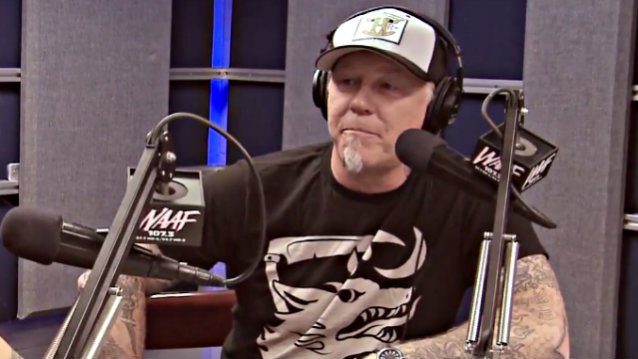 METALLICA frontman James Hetfield has commented on the passing of Chris Cornell, calling it a "sad story" that "makes you realize that there is a darkness that anyone and everyone can find and feel."

Cornell apparently died on May 17 after SOUNDGARDEN played a show in Detroit.

Chris's wife Vicky and an attorney representing the Cornell family have questioned the results of a medical examiner's report that said the 52-year-old musician committed suicide.

Speaking to Mistress Carrie of the Worcester/Boston, Massachusetts radio station WAAF, Hetfield stated about Cornell's tragic death (see video below): "Well, it does make you hug those around you, for sure — bandmates, family that's out here, family at home. It makes you realize that, you know, there is a darkness that anyone and everyone can find and feel that they're trapped in. And when you're there — and at least I know the depth of my darkness at times — it is difficult when you're in that space to even fathom that there's someone there that can help you or has been through that before. Sometimes you're at such a loss…

"Yes, it's a sad story, and there's a lot of sad stories recently, especially in the grunge world, losing a lot of people," Hetfield added. "And for us, [losing] Lemmy and all of the things that have been happening in the last couple of years, it just makes us feel even more grateful to be out here doing what we're doing."

Cornell will be laid to rest on Friday, May 26 in Los Angeles. Confirmation came from his attorney Kirk Pasich. Cornell's body was flown from Michigan to Los Angeles on Sunday, and the singer will be buried at the Hollywood Forever Cemetery. The funeral will be private.

A full autopsy and results of toxicology tests are pending, although Cornell's wife has said he may have taken more of an anti-anxiety drug than he was prescribed. His family issued a statement Friday questioning whether his death by hanging was intentional and if "substances contributed to his demise."

SOUNDGARDEN had been working on material for their seventh studio album and had plans to record it later this year.

The band reunited in 2010 after a 13-year hiatus, first touring and then writing and recording "King Animal", their first new studio album in 16 years.