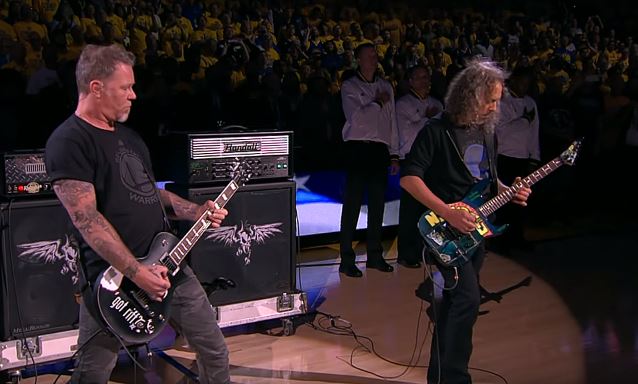 Says METALLICA: "Our congratulations to the San Jose Sharks for winning the Western Conference title and skating in the Stanley Cup Finals for the first time in their 25-year franchise history.

"In keeping with our tradition of supporting all our hometown teams, James and Kirk will hit the ice to perform the National Anthem at Game 4 today, Monday, June 6th at the SAP Center in San Jose, CA.

"Tune into your local NBC station to catch the performance live at 5 p.m. Pacific while we cheer on the Sharks as they face the Pittsburgh Penguins."

Each of the guitars used during tonight's performance will be signed by the members of METALLICA, displayed on the concourse during the game and then donated to the Sharks Foundation to be auctioned off. Fans will be able to bid on the guitars until Wednesday, June 15, with proceeds going to Little Kids Rock and the Ronald McDonald House at Stanford, with each receiving 50 percent of the total raised.

METALLICA has supported the Sharks for years, and the Sharks skate through their iconic shark head and onto the ice for home games while METALLICA's "Seek And Destroy" is played.

The band's members are no strangers to SAP Center. Hetfield was in attendance when the Sharks clinched their first trip to the Cup Final with a 5-2 win against the St. Louis Blues in Game 6 of the Western Conference Final.

Last season the Sharks held "Metallica Night". The band dropped the opening puck, helped with the lineup announcement and were presented with custom Metallica Sharks jerseys.