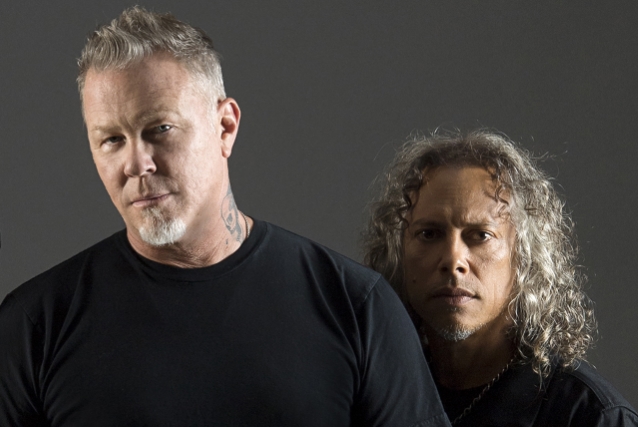 METALLICA's James Hetfield and Kirk Hammett will perform the U.S. national anthem before tip-off tomorrow (Wednesday, June 5) as the Golden State Warriors host the Toronto Raptors for Game 3 of the N.B.A. finals at Oracle Arena in Oakland, California. The Canadian national anthem will be performed by Tenille Arts. Tune in early to ABC in the U.S. and Sportsnet in Canada to watch.

The spring/summer 2019 leg of METALLICA's European tour commenced on May 1 at Estádio do Restelo in Lisbon, Portugal and includes 25 dates across the continent, closing at Mannheim, Germany's Maimarktgelände on August 25. The trek is visiting 20 countries in total, with stop in cities METALLICA didn't play on part one of the European "WorldWired" leg, which was an indoor arena tour.

Look for James and Kirk to perform the National Anthem before tip off tomorrow as the @Warriors host the @Raptors for Game 3 of the #NBAFinals. The Canadian National Anthem will be performed by @TenilleArts. Tune in early to ABC in the U.S. and Sportsnet in Canada to watch! pic.twitter.com/sV3uCXcWr5