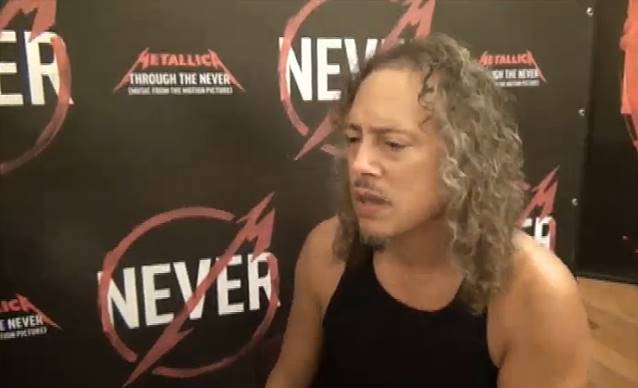 METALLICA guitarist Kirk Hammett was interviewed by the Brazilian news portal R7 when the band headlined the Rock In Rio festival in Rio De Janeiro on September 19. You can now watch the chat below.

Asked who he thinks will be the next generation of festival headliners, Hammett replied: "It's hard to say... MUSE, they're already headlining festivals. Maybe QUEENS OF THE STONE AGE. It's hard to say. There haven't been a lot of really, really great bands that have shown that kind of promise, you know. I think it's a concern. Because of things like iTunes and streaming and social networking, it's destroyed music. It's destroyed the motivation to go out there and really make the best record possible. It's a shame."

METALLICA's Lars Ulrich has acknowledged in a new interview with U.K.'s Kerrang! magazine that the band's next studio album is unlikely to arrive before 2015 at the earliest. The drummer explained: "Obviously, there are a lot of people asking where the next record is. We're going to make another record, but like I said before, we don't really feel this kind of… what's the word? I guess 'responsibility' is probably the right word. We don't feel this inherent responsibility to just churn out records whenever people want them. [Adopts a sarcastic voice] 'I'm sorry! Let me slap myself on the wrists and go make a record for you!' We'll get 'round to it again."

Asked about a possible release date for METALLICA's next CD, Ulrich replied: "Actually, we know the date… no, we don't! If I was betting on this, I would say 2015 — that's where my money is. So if you think of the actual age of this planet, if it's been 75 billion years since dinosaurs walked the Earth or whatever, then one year is basically a blink of an eye, right?"

Ulrich also spoke about METALLICA's mindset going into the songwriting phase for the band's next album. He explained: "The only thing I can tell you is that there seems to be a consensus in the band that [2008's] 'Death Magnetic' was a really good record that we're proud of, that had good legs on it — meaning that it still sounds really rocking five years later. And I can tell you that with most of the previous METALLICA records, I found any faults, I had any issues with them way, way sooner than five years. So the stuff that we've been jamming on is certainly not a million miles removed from where we left off from 'Death Magnetic'. But two years from now, when I sit and talk to you about the new record, it'll probably be a different story from the six-year-old looking for the ice cream shop."

According to Lars, there is no shortage of ideas for METALLICA's next CD, with the guys having met up twice in the last six months to cook up some tasty riffs in the studio.

"We have more riffs than we know what to do with," Ulrich said. "We talked about setting up a special riff thing, where maybe we could share some of these riffs with others, like an eBay kind of thing for leftover riffs. Some of them are actually quite decent, but we won't be able to use all of them."

METALLICA has been touring for the past couple of years, in addition to launching two editions of its Orion Music + More festival and filming its new 3D IMAX movie, "Metallica Through The Never", which opened on September 27.

Meanwhile, Ulrich told a San Francisco radio station last month that the band has something coming up in December that will surprise fans, calling it "another frontier . . . which we're very excited about."