The one-off September 6 event will see METALLICA join forces with the orchestra for the first time in two decades for the opening of San Francisco's new Chase Center arena. METALLICA and the San Francisco Symphony last played together in 1999, at a concert that was recorded and filmed for the "S&M" album and DVD.

The classical musicians and classic rockers will be the first acts to perform at the new 18,064-seat arena that will serve as home to the NBA team Golden State Warriors in the fall.

On Tuesday (March 19), METALLICA fans took to Twitter to express their outrage after the pre-sale for the "S&M²" show ended within seconds due to bots grabbing all the available tickets.

Members of METALLICA's fan club were supposed to be given the opportunity to buy tickets a few days early, but it was reported that tickets began showing up instantly at StubHub before fans had a chance to view their pre-sale opportunity.

Fans reported signing in at exactly 9:00 a.m. PT and being unable to purchase a single ticket, while tickets went on sale at StubHub via resellers at prices ranging from $300 to $16,000 for one ticket.

The original "S&M" concerts were conducted by the late Michael Kamen in spring of 1999 at the Berkeley Community Theatre. The "S&M²" concert will feature the first live performances of these arrangements in 20 years, plus the first-ever METALLICA/San Francisco Symphony renditions of songs written and released since the original "S&M", with new orchestral charts by Bruce Coughlin. 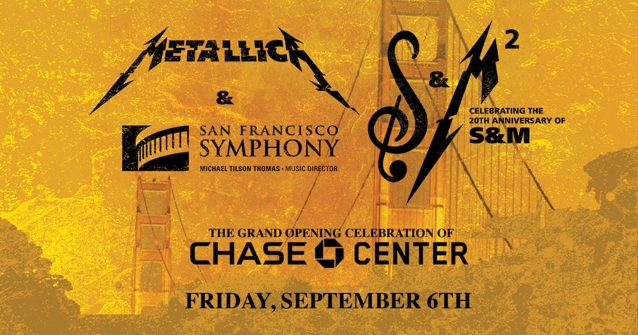