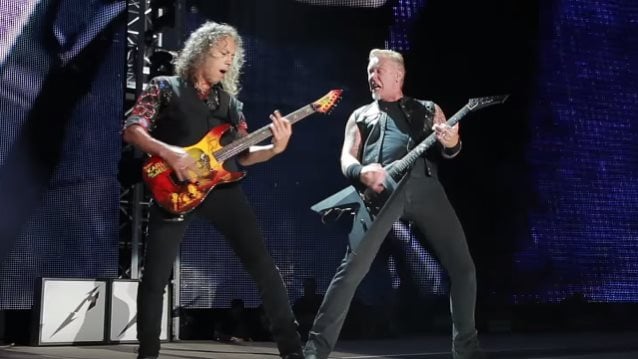 METALLICA has uploaded a nineteen-minute video in which guitar techs Chad Zaemisch and Justin Crew walk us through James Hetfield's and Kirk Hammett's "WorldWired" tour guitar rigs. Check out the clip below.

Hammett told the 107.7 The Bone radio station in Augustthat the North American leg of "WorldWired", which kicked off on May 10 in Baltimore, Maryland, was "in-fucking-credible. We're constantly being blown away by just… Everywhere we go… 'Cause it's been a while since we've been in America doing a tour like this, and we were a little bit apprehensive: 'Are people gonna show up with the same enthusiasm that they did last time?'" he said. "But they certainly have, in droves, and then more so. I mean, people are showing their love more than ever for METALLICA, and it's great. And just as importantly, we seem to be reaching a lot of new fans who have never seen us before, and to us, that's fantastic."