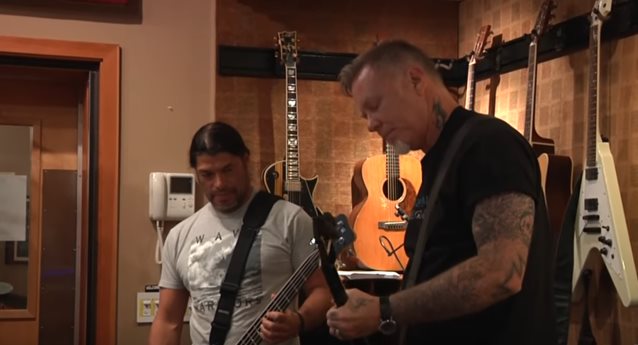 Video footage of METALLICA in the band's headquarters in San Rafael, California during the writing and recording of "91", the song that later became "Dream No More", can be seen below.

Nevertheless, the overall fan reaction to the new disc has inspired the band to release its next record sooner. Frontman James Hetfield told Italy's Linea Rock, "At least for now, we've booked out two years (of touring), at least. So I can't predict the future, but… I would like to make some new music sooner than eight years, for sure. (You get) such a pleasure and a joy of hearing your new music and having other people hear it. So we don't wanna wait that long."

Meanwhile, Hetfield revealed in a separate interview with Metal Hammer that things got heated at one point between him and drummer Lars Ulrich in the studio while making the new disc.

Hetfield explained: "We were in the studio and it was like, 'Hey, I'm the guitar player, I like this guitar part, I wanna play it.' He'd be like, 'This part is better,' and I was like, 'Since when are you the Riff Police?' So at that point it was, 'Okay, I'm done for now, I have to leave.' But a week later we were talking again."

The official video for "Dream No More" can be seen below. The clip was directed by Tom Kirk, who previously helmed the band's video for "Moth Into Flame".