METALLICA's classic 1988 album "…And Justice for All" is featured in the December 2008 issue of Decibel (web site) as part of the magazine's ongoing Hall of Fame feature. The Hall of Fame feature highlights influential and pivotal releases in metal history, and "…And Justice for All" has joined the ranks of previously profiled classics such as SLAYER's "Reign in Blood", SEPULTURA's "Roots", BLACK SABBATH's "Heaven and Hell" and AT THE GATES' "Slaughter of the Soul". METALLICA members James Hetfield, Kirk Hammett and Lars Ulrich, as well as the group's former bassist Jason Newsted, were interviewed for the article, which coincides with the album's 20th anniversary. An excerpt from the feature follows below.

Decibel: Some fans are under the impression that the bass was intentionally turned down in the mix as part of the infamous hazing process Newsted was subjected to when he joined METALLICA. Is that the case?

Ulrich: No, it wasn't intentional. Like I was saying earlier, "Justice" was the James and Lars show from beginning to end, but it wasn't "Fuck this guy — let's turn his bass down." It was more like, "We're mixing, so let's pat ourselves on the back and turn the rhythms and the drums up." But we basically kept turning everything else up until the bass disappeared. (Laughs)

Hammett: The reason you can't hear the bass so well is because the bass frequencies in Jason's tone kinda interfered with the tone that James was trying to shoot for with his rhythm guitar sound, and every time the two blended together, it just wasn't happening. So the only thing left to do was turn the bass down in the mix. It was unfortunate, but for some reason or another, that album is known for the low end being there without the bass being very high up in the mix. It was an experiment, too — we were totally going for a dry, in-your-face sound, and some people really like that sound. A lot of the newer-generation bands, especially, think that album sounds great. But at the end of the day, it was an experiment. I'm not really sure it was 100 percent successful, but it is a unique sound that that album has.

Newsted: METALLICA has always recorded in a very different manner than any type of popular rock or country music, where the drums and the bass are recorded first and you put the melodies and the guitars and all that stuff on afterwards. For the entire existence of METALLICA — and the only band Lars has ever been in is METALLICA — he has had only the rhythm guitar and the vocal coming out of his monitor at 130 decibels behind his head. There's no bass in his monitor at all, so it's not a situation where the drummer and the bass player go together on groove, like in any band I've ever listened to. So that was real different for me to get used to and for any bass player to deal with. And Robert [Trujillo] probably has to deal with it to this day. There's just no bass coming out of the drummer's monitor. So you have to think of that as part of the equation.

But to answer your question about the intentional thing? Maybe they were still exorcising that thing that they were still trying to deal with and obviously didn't deal with until like 2002 or something, when they finally came to grips with what had been taken from them. That was still present, absolutely. They didn't know how to channel those feelings and emotions at that time. It wasn't something they had the capacity for. When you get young guys together and they all become millionaires by age 25, you miss a few developmental stages that everyone else — people who live a less-accelerated lifestyle — go through. So the developmental things could've played a part in them just keeping the bass down rather than going through and listening to what was played good and what wasn't played good. Being drunk at three c'clock in the afternoon, going into some studio in upstate New York with a couple of cats who are getting paid real good and could really give a shit about being there or not at sometimes… you know what I mean? Guys who were assigned to make a certain product sound a certain way. This was a chance for METALLICA to get on the radio, so they're mixing with that kind of thing in mind — those were the kind of people who were hired to mix the record. Look at the credits — those were people who mixed radio songs. Those weren't the guys who mixed SEPULTURA records. So all those factors must play a part in what we hear with our ears now. But it'd be cool as fuck for somebody else to go back and remix it, because I think it could be really fun to have a whole new album. Because that's what it would be. 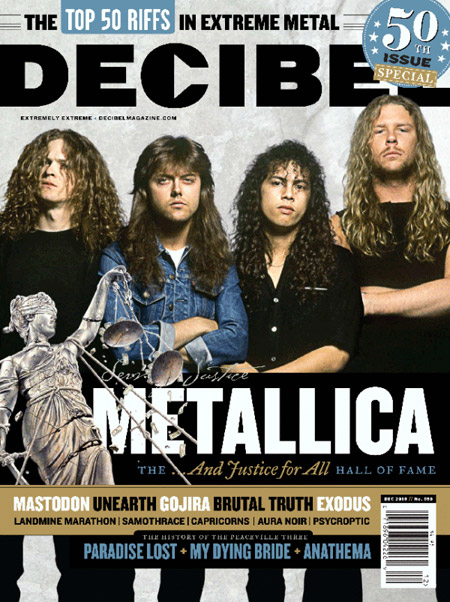