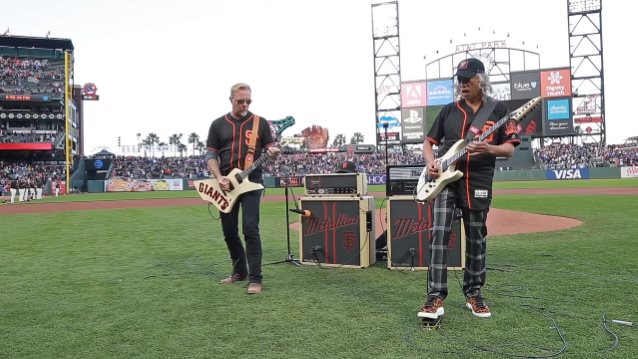 METALLICA and the San Francisco Giants held the fifth annual "Metallica Night" this past Monday (August 7) at AT&T Park in San Francisco as the Giants took the field against the Chicago Cubs. METALLICA once again threw out the first pitch and James Hetfield and Kirk Hammett performed a version of "The Star-Spangled Banner". Hammett also played an instrumental solo rendition of "Take Me Out To The Ballgame". Both were playing customized San Francisco Giants guitars. Hetfield later came out on the field with the Giants' ground crew and played air guitar on one of the large dirt rakes.

"Five already? It's been going pretty quick," Hetfield told Bay Area HQ about the event. "Well, we're blessed to be doing this every year and being a part of the vibe here. You know, when times are good, when times are bad, they need the support."

Special-event METALLICA ticket packages included a ticket to the game and a limited-edition METALLICA/Giants T-shirt, with a portion of the proceeds from every special-event ticket sold benefiting the Posey Family Foundation. There was also an exclusive VIP event that night in Triples Alley with Ulrich hosting a pre-game question-and-answer session with tennis coach, commentator and author Brad Gilbert to talk sports, music and more.

A video recap of this year's "Metallica Night" can be seen below.

Hammett told ESPN.com that he feels the version of the national anthem he and Hetfield play is "really unique and different," and it's great that they can play it for their home team and hometown audience.