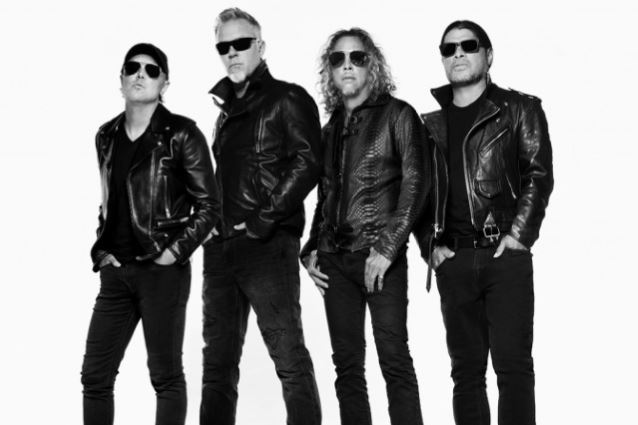 Pop superstar Lady Gaga will perform with METALLICA at this year's Grammy Awards.

News about the collaboration was broken last night (Monday, February 6) via a TV commercial, which was then tweeted by a Gaga fan site and can be seen below.

"It has been my dream for so long to hear Gaga sing metal with a legendary band. I have never been so excited for a Gaga performance," a fan on the Gaga Daily forums wrote in response to the news, while another added: "She is the only pop star who could duet with METALLICA."

It's unclear which song METALLICA will play at the event, which will air live from the Staples Center in Los Angeles on Sunday, February 12 at 8:00 p.m. ET on CBS.

METALLICA previously promised "something very unique and special" for its performance at this year's Grammy Awards, where the band is up for a Grammy in the "Best Rock Song" category for the track "Hardwired", from METALLICA's latest album, "Hardwired… To Self-Destruct".

METALLICA's nomination for "Best Rock Song" was a surprise since the band is not included in the "Best Metal Performance" category.

Lady Gaga spoke about her love for IRON MAIDEN and BLACK SABBATH in various interviews over the years, calling the experience of seeing MAIDEN for the first time a "life-changing" event. The singer also appeared in photos with Rock And Roll Hall Of Fame inductee Alice Cooper and ANTHRAX drummer Charlie Benante.

JUDAS PRIEST singer Rob Halford has spoken several times about his interest in a possible collaboration with Lady Gaga, explaining: "I got to see her show in San Diego, and she's a metalhead. That's the most important part of this conversation. She's a metalhead. She was wearing a PRIEST 'Ram It Down' t-shirt the other day in New York. So we met, and we only talked briefly. But if there's a chance to do a track or something, I would love it. Because collaborations can be very, very exciting and very spontaneous."

Halford first met Lady Gaga in June 2014 after her show in San Diego. He attended the concert with Lady Starlight, Gaga's longtime friend and collaborator who supported JUDAS PRIEST on tour in 2011.

Lady Gaga is set to perform with Metallica at the #GRAMMYs this Sunday, February 12th! pic.twitter.com/SqPDLqclBV