Since opening its doors in 2014, House Of Vans London has welcomed some of the biggest music acts in the world; 2016 follows suit, closing out the year with a show for the history books. Come November 18, one of the world's most successful bands and Rock And Roll Hall Of Fame inductees, METALLICA will launch their eleventh studio album, "Hardwired... To Self Destruct", with a special live performance at House Of Vans London. This November, fans will celebrate the new album by packing in to the intimate setting at House Of Vans.

As Vans continues to honor 50 years of "Off The Wall" heritage in action sports, art, music and street culture, it brings a truly one-of-a kind experience to House Of Vans London with one of the world's most influential and culturally iconic bands. Vans commitment to music has never been more befitting as they close out a historical milestone with an ultra-rare METALLICA performance that promises to launch the new album alongside a number of hits from the band's expansive backlog.

This extremely special event at House Of Vans will be free* to the public and tickets can be claimed via ballot system at www.houseofvanslondon.com from 10 a.m. GMT on Friday, November 4. Ballot closes Sunday, November 13 at 6 p.m. GMT.

*All successful ballot applicants will be subject upon entry to an obligatory £20 donation to The Railway Children; a key charity partner of House Of Vans that fights for children who live alone and at risk on the streets in the U.K., India and East Africa. 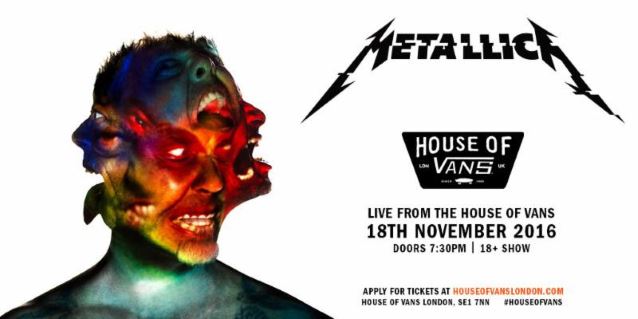