METALLICA will be joined by Chinese concert pianist Lang Lang during the band's January 18 concert at LeSports Center in Beijing.

According to promoter AEG China, Lang Lang will play METALLICA's classic song "One" from the "…And Justice For All" album.

METALLICA previously performed the track with Lang Lang in January 2014 at the 56th annual Grammy Awards.

Says the band: "Three years ago, we were honored to share the stage with Lang Lang at the Grammy Awards as we performed 'One' together. It was one of the most creative, unique performances of our career. And we're thrilled to announce that Lang Lang will join us again, this time in Beijing on January 18, 2017 when we take over Le Sports Center for a sold-out stop on the first leg of the 'WorldWired' tour this year.

"Having toured around the world himself, we're excited to collaborate with Lang Lang in his home country and are ready to kick off the new year with five shows in Asia... It's just the beginning of a full year of 'WorldWired', so we'll see you out there!"

Grammys executive producer Ken Ehrlich told ABC News Radio about how METALLICA's collaboration with Lang Lang came about: "METALLICA's manager was in China and he met with a guy who presents Lang Lang there, and they just started talking about it. Independently, I actually had called [METALLICA's] manager and said, 'Look, we're interested in you in the Grammys this year,' and the first thing out of his mouth was, 'How about us and Lang Lang?'"

"Somehow the METALLICA team had this great idea to work together," Lang Lang told the Sarasota Herald-Tribune.

"The Grammys are basically a stage for synthesizing music together. It's a perfect stage for musical friends to be united."

He added: "They were such cool people and I had a wonderful time working with them.

"Now everywhere I go, particularly in America, everyone is talking about it," Lang Lang said. "Even checking into a place, going through customs, people say, 'Wow, you played really great!'"

During the rehearsals for the Grammy Awards, METALLICA drummer Lars Ulrich told Artisan News about playing with Lang Lang: "Well, I would like to think that on a broader scale that music is music. We have a tendency in METALLICA to not look much beyond that in terms of definitions. But, obviously, he's a very talented musician, he's a very dynamic musician, he projects himself very well. I mean, when he plays, he's really full of energy and he's got a lot of kind of showmanship and kind of energy that protrudes off the stage and right into people's hearts and souls. So I would like to think that it's a good collaboration."

Hammett told The Pulse Of Radio that the song's arrangement highlighted Lang Lang's playing without changing the song. "We're not lightening up the song just for him," he said. "We're still hanging onto all the heavy parts and it's gonna be amazing. He's just an amazing pianist, and at one point he's going to be, like, weaving in and out of my guitar solo and playing parts of my guitar solo with me. That's gonna be interesting. I've never, ever experienced that ever before with anyone we've ever played with."

"One" was the first single released from METALLICA's 1988 album "…And Justice For All", becoming the first song from the band to gain substantial commercial radio airplay. It was also the basis for the first music video the group ever did.

Hammett told Rolling Stone that METALLICA recorded a demo of "One" with Lang Lang's contributions on it. 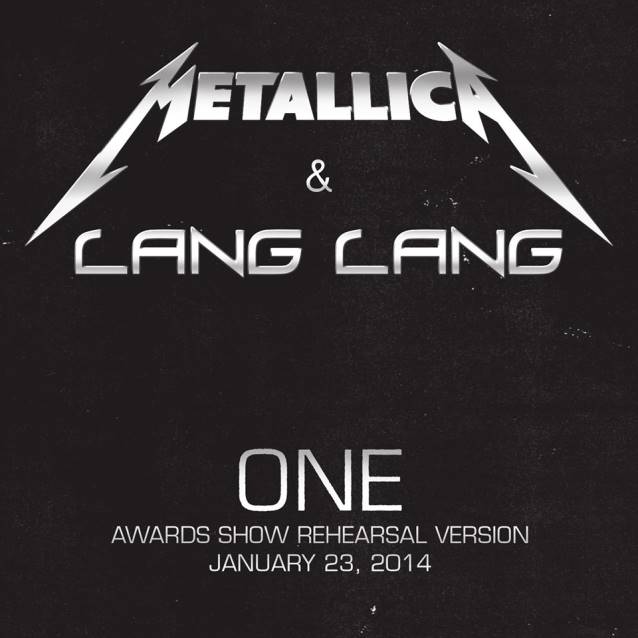