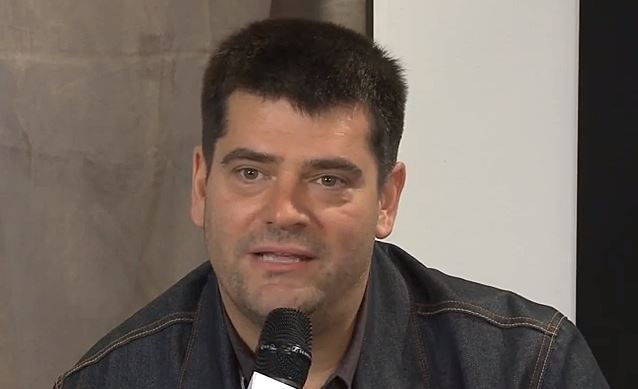 The Dissolve recently spoke to award-winning filmmaker Nimród Antal ("Predators", "Kontroll") about his groundbreaking 3-D motion picture "Metallica Through The Never". Asked how the initial treatment compared to the film as it is now, Antal said: "The process itself was three major steps: There was when I sat with [METALLICA drummer] Lars [Ulrich] and he explained what it was they were hoping to do. I was fascinated by the concept of taking some kind of story into a concert setting. So I felt that was refreshing and different, and I liked the challenge of doing that.

"The first step and the first thought behind it was that METALLICA represented 'fuck you' music to me. They've always represented rebellion, and certainly when I got into them, I was going through a very difficult period in my young life. So rebellion and protest seemed to be a given. That was one thing. The second thing was, there's a book I was very fond of with a beautiful structure — it's a circular structure, and I liked the idea of a character starting somewhere and going on this epic journey that ultimately returns him to the place he started from. That was an elegant structure. And the last element was meeting with a guy called Dan Brown who works for them, meeting with other members of their crew. I realized in conversation with them how passionate and loyal they were to the guys, and how they were willing to lay their lives on the line every day to make it happen for the band. That was inspirational, for lack of a better word. It was really that last conversation with them that [Dane DeHaan's character] Trip was born. That was it — that was the journey to get the story."

He continued: "I wanted it to be obscure. I wanted it to be abstract. I didn't want the whole American, bow-tied little three-act structure. It seems that given this is a concert film first and foremost, I had to come up with a concept and idea that would be able to work within what they were doing. You don't have an hour and a half, you don't have two hours to spend with the character, you don't have dialogue — you're missing so many elements that help you in a narrative and help the viewers connect with the characters. So what I was hoping was going to be the connection, much like James [Hetfield, METALLICA frontman] said last night, you put yourself into it, and you can fill in the blanks. I certainly have ideas, and I certainly know where I was going with it, but someone may have a far more fascinating take on it if they allow themselves to interject themselves into the story."

Antal also spoke about filming the performance footage for the "Metallica Through The Never" movie, explaining: "The concert itself was shot over five days. We had two days in Edmonton, two days in Vancouver, and then a plus date in Vancouver. The first two Edmonton concerts and the first two Vancouver concerts were full-blown concerts: ticket-buying audience, band comes out, band starts to play, band finishes the concert, audience cheers, we cut the camera. It was only on the fifth day that we did more like a half-set kind of deal. I wanted to make sure we were capturing certain shots. In the entire concert film, there's only one or two manipulated shots, and what I mean by 'manipulated' is, we had to set up a move. Even Trip in the audience was live while the concert was going on. But there were one or two shots we had to go back and pick up. I remember there was one where Lars has the double kick-drum [makes double kick-drums sound], and that was one shot we picked up on the fifth day — stuff like that. Otherwise, what you see is a real live concert."