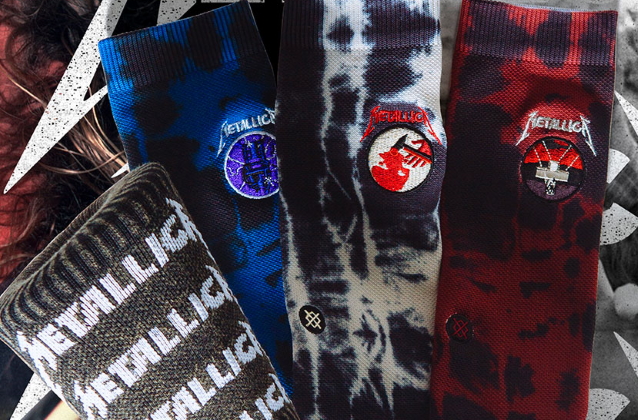 METALLICA has teamed up with luxury sock company Stance to release a new line of socks. The METALLICA-branded products include designs based on the band's albums "Kill 'Em All", "Ride The Lightning" and "Master Of Puppets".

METALLICA said in a statement: "Check out our latest collaboration, this time with sock icons Stance. This collection features eight different styles, including a mix of performance and casual options, plus something for the kids, too!"

Nearly three years ago, Stance released a line of footwear from its "Legends Of Metal" range, featuring designs that were approved by SLAYER, MOTÖRHEAD and IRON MAIDEN.

According to the Los Angeles Times, Stance features socks with wild patterns and colors that can cost as much as $50 a pair. The company has grown to over $100 million in revenue and has spread beyond action sports into basketball, baseball, running, climbing, golf, fashion, and music, and is aligned with many celebrities.

Stance's co-founder John Wilson is the former president of Reef and has been an executive at Oakley. He was recently named chief executive officer for the brand, replacing brand co-founder Jeff Kearl, who continues to serve Stance as its chairman.