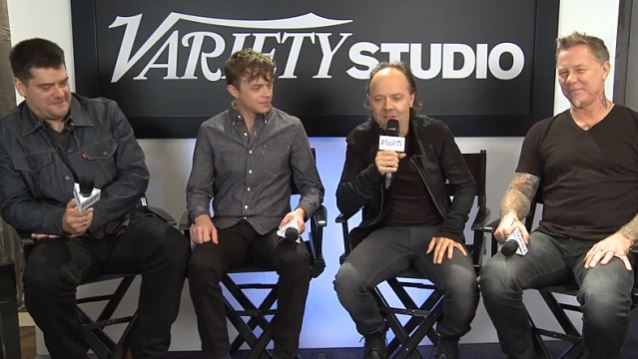 METALLICA's new movie, "Metallica Through The Never", made its world premiere Monday night (September 9) at the 38th annual Toronto International Film Festival. The film, a blend of concert movie and fictional narrative, stars Dane DeHaan as a member of METALLICA's road crew who is sent on a mysterious mission while the band performs at a sold-out arena and events outside grow more bizarre.

"There was a lot of times in this movie where we're like, 'No way, we can't do this. Let's just pull the plug," said Hetfield. "From the money it's gonna take to make this thing, how long it's gonna take to even break even; our kids could still have the bill for this thing."

In an interview with CNN this past July, Hetfield said that a lot of thought went into creating the exact right film for METALLICA.

"People have done live concerts," Hetfield said. "We've done live concerts and DVDs. If we're going to invest a lot of time and money and effort into something, let's make it unique. That's what we've always done. We had a ton of ideas for this thing. You get really creative with something way out of your budget and then you shrink it down. Some of the best ideas hang on and end up in the film. We wanted animation, we wanted CGI — you name it! But I think the narrative is extremely potent and multilayered. There's a lot of dynamics going on at once. It's a couple movies in one."

A review of the film by Dennis Harvey of Variety can be found at Variety.com.