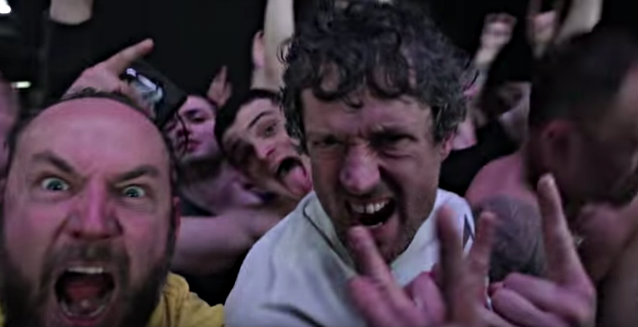 METALLICA has uploaded a five-minute video spotlighting several extremely loyal fans who travelled great distances to attend the band's three concerts at the Royal Arena in Copenhagen, Denmark in February. Check out the footage below.

METALLICA played its third concert in Copenhagen on February 9 as part of what was initially supposed to be the final of a four-night stand at that city's Royal Arena. The first show was cut short on February 3 when frontman James Hetfield took ill.

Hetfield was put on complete vocal rest the next day, forcing the band to postpone the second show on February 5. METALLICA returned to the stage on February 7.

METALLICA today announced the European leg of its "WorldWired" tour in support of the band's new album, "Hardwired… To Self-Destruct". The trek kicks off with two shows in Amsterdam at the Ziggo Dome on September 4 and September 6. Norway's KVELERTAK will be support for the tour run.

Every ticket purchased through official outlets includes your choice of a standard digital or standard physical copy of "Hardwired… To Self-Destruct". Redemption information will be included in your ticket purchase confirmation email. Full details of how you can gift the album, should you have already purchased, will be given on the redemption page. Please note that shipping and handling fees apply to the physical version of the album.

METALLICA has partnered with CID Entertainment to offer three options of special enhanced experiences on this tour, including premium tickets and amenities, early access to the venue, a visit to the "Memory Remains" exhibit of memorabilia, and meet-and-greets. For full package details, go to this location.