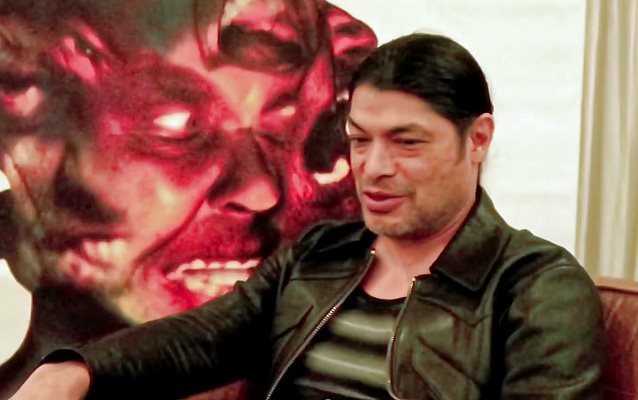 Robert Trujillo says that he was "really impressed" by Lady Gaga when METALLICA collaborated with the pop superstar at this year's Grammy Awards.

Asked by Brazil's Cauê Moura if he has any guilty musical pleasures that some fans might find particularly surprising, the METALLICA bassist said (see video below): "In modern music, today, like what's going on, I'm boring. I don't have anything exciting to tell your fans about listening to Justin Bieber, 'cause I don't. I have an appreciation for Lady Gaga, because she can really sing and I didn't know that before her performance on the halftime show for the Super Bowl. I was impressed. Hey, me personally, I was impressed. And when I met her and I heard her singing the METALLICA song 'Moth Into Flame' at rehearsals, I was really impressed by her and her attitude towards, hey, music… She could play, she could sing, and it was honest and sincere and the attitude was there. I always love attitude. I love people that [approach performing like] it's all about having fun and kicking ass."