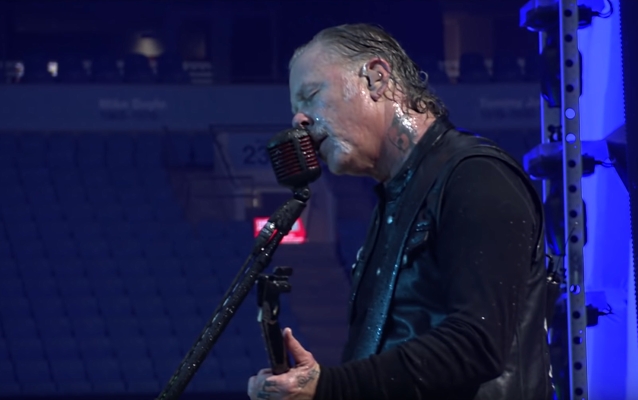 Professionally filmed video footage of METALLICA performing the song "St. Anger" on June 18 at Etihad Stadium in Manchester, England can be seen below.

"St. Anger" is the title track of METALLICA's 2003 album, which was released at the end of a turbulent two-year period in which bassist Jason Newsted left the group, frontman James Hetfield went for a lengthy stay in rehab, and the entire band threatened to break apart. The album's raw, lo-fi production, lack of guitar solos and unorthodox sound were not well-received by many of the group's fans, who still often cite it as METALLICA's worst record. "St. Anger" has nevertheless sold more than six million copies worldwide, although fans have generally not warmed up to it in the 16 years since its release.

METALLICA drummer Lars Ulrich admitted to The Pulse Of Radio a while back that the band was surprised by the hostile reaction to "St. Anger". "It threw us a little bit, sure, 'cause the whole thing was to just keep it as raw as possible," he said. "And I'd like to think that we accomplished that [laughs], to the point of obviously a little too raw for some people, and that's okay. I mean, it is what it is. I have not one regret about it. I'm proud of it, proud that we had the balls to see it through."

Last November, Ulrich told The Mercury News that the trek could last through early 2020.