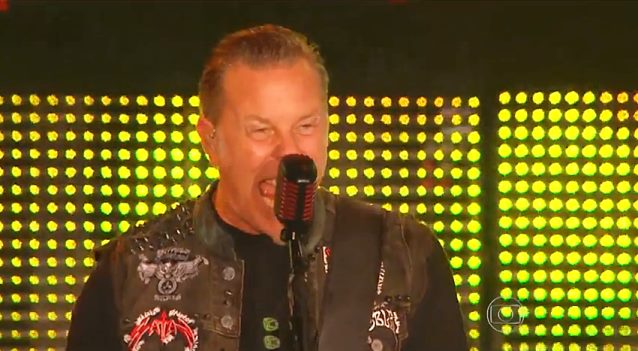 Professionally filmed video footage of METALLICA's September 19 performance at the Rock In Rio festival in Rio De Janeiro, Brazil can be seen below.

According to The Pulse Of Radio, METALLICA drummer Lars Ulrich explained in a question-and-answer session that followed a recent screening of METALLICA's upcoming movie, "Metallica Through The Never", that the film has actually inspired the metal legends to get moving on new music. Ulrich said, "Getting a chance to do all these challenges and adventures really fuels us to go back into the studio and make hopefully a better album... METALLICA, I think, increasingly depends on these types of things to feel challenged as artists. So making films is great and it certainly gets us out of our comfort zone, so when we get back to the studio we just feel more inspired and more invigorated."

Ulrich told The Pulse Of Radio not long ago that the band gets energized by branching out into other projects before returning to work on its next record. "There'll be a new record and we certainly never want to turn into a nostalgia band, but at the same time, you've got to keep yourself, I guess, creatively alive and that's what we do by playing these gigs and doing all these other projects and doing movies and festivals," he said. "I mean, it's just, all that stuff's a lot of fun, but it takes a lot of time, you know."

The drummer added that the band is immensely satisfied with the filmmaking experience and final result, saying, "Three years later it's just so cool to sit up there and feel the energy and take it in that energy on the screen."

Frontman James Hetfield agreed that the band's creative process while making the film was similar to the way it comes up with ideas for its albums, saying, "We had a whole bunch of ideas and that was the easy part. Making them all come to fruition and getting them in the movie was (the hard part). We couldn't put everything in there as the price tag would have doubled or tripled."

"Through The Never" premiered earlier this month at the Toronto International Film Festival and will open in IMAX theaters on September 27, expanding to more screens on October 4.

This Saturday (September 21), METALLICA will play a special show at New York's famed Apollo Theater as part of the promotion for the film.