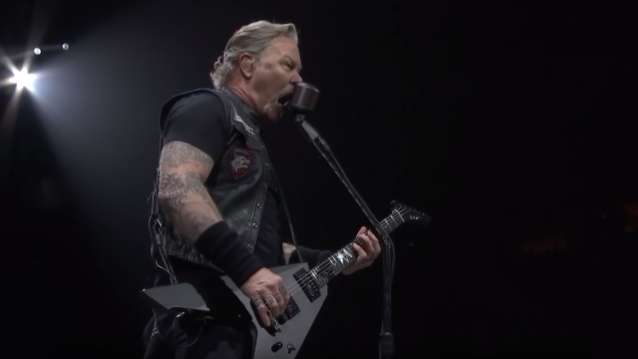 Professionally filmed video footage of METALLICA performing the song "Atlas, Rise!" on January 24 at Bridgestone Arena in Nashville, Tennessee can be seen below.

In the song "Atlas, Rise!", METALLICA frontman James Hetfield calls out Atlas, the Greek mythological figure which was responsible for bearing the weight of the heavens on his shoulders, a burden given to him as punishment by Zeus.

Hetfield told Rolling Stone Australia that he had his METALLICA bandmate Lars Ulrich in mind when he wrote the lyrics to the track. "Lars is, 'I have to do everything, or else it's wrong,'" he explained. "He's got the weight of so much on him. And 'Atlas, Rise!' started out as a, 'Here, let me help you with that. You don't need to carry all that, brother.' And then it morphed into more — and this is not specifically him, but I'm plugging him into this — I think he likes that. There's a drama that makes him work, and we all have a bit of that. He wants the control but he doesn't really have control. The illusion of control, and then the ability to complain about how you have to do everything yourself, and then you still do it."

"Atlas, Rise!" is taken from METALLICA's latest album, "Hardwired… To Self-Destruct", which debuted at No. 1 on The Billboard 200 album chart, selling 291,000 copies in its first week of release.