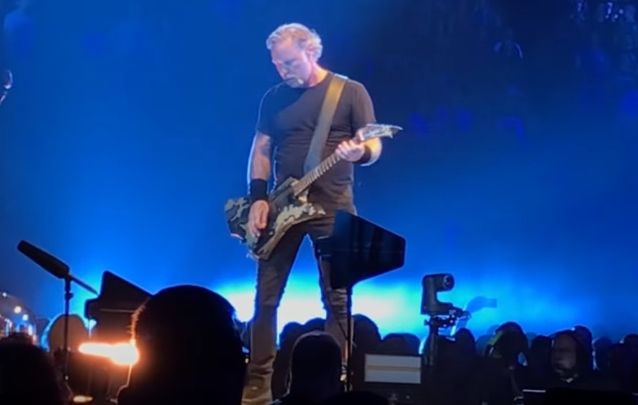 METALLICA played the song "Here Comes Revenge" live for the first time last night (Saturday, March 2) at the United Supermarkets Arena in Lubbock, Texas. Fan-filmed video footage of the performance can be seen below.

METALLICA frontman James Hetfield told Virgin Radio that "Here Comes Revenge" was inspired by the tragic death of a fan of the band. Hetfield explained: "There's a couple that showed up at so many shows, and they got into METALLICA because their young daughter was a big fan, and she had gotten killed by a drunk driver."

Hetfield continued: "It just hit me: 'How can you guys find something positive in the world to connect you to your daughter again' — which was METALLICA, the music she loved — 'instead of just snapping and wanting to just become bitter and attack whoever did this?' So I'm kinda putting myself in those shoes and how revenge must feel really powerful and great to do, but it doesn't satisfy that urge."

Hetfield previously told Australia's Rolling Stone about the first time he met the couple: "[The guy] said, 'My wife and I weren't fans of the band, but we are now. Because our daughter was a big fan, and she got killed by a drunk driver.'

"She was young. How could you not be pissed off? How could you not want to go after somebody? But what they chose to do was embrace the music she loved and get to know her through the music and connect that way instead. They continue to show up at shows, which I love. We're friends now. And they've gotten through something that I don't think I could get through."

"Here Comes Revenge" is taken from METALLICA's latest album, "Hardwired… To Self-Destruct", which came out in November 2016.

METALLICA kicked off the 2018/2019 U.S. leg of the "WorldWired" arena tour last September at the Kohl Center in Madison, Wisconsin.