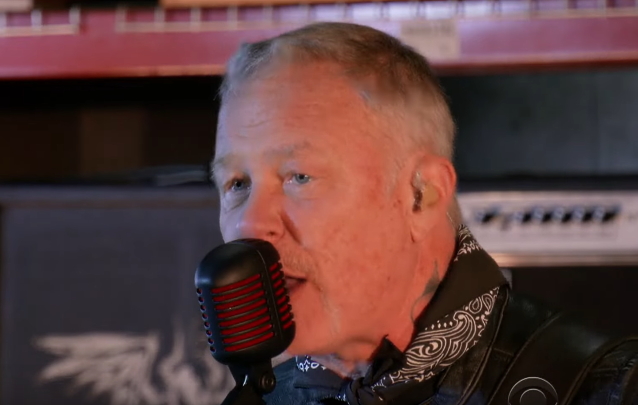 This is not be the first time that METALLICA has appeared on a talk show hosted by Stephen Colbert. In May 2017, METALLICA performed the song "Now That We're Dead" on an episode of "The Late Show With Stephen Colbert". Prior to that, the band sat down for an interview and performed on Comedy Central's "The Colbert Report" in September 2013.

Last May, the four members of METALLICA overcame social distancing to record a new version of their song "Blackened", with each member separated in his own home. The split-screen video was posted to the band's social media channels. That same month, Ulrich told Swedish talk show host Fredrik Skavlan that he and his bandmates were "sending ideas to each other via e-mail and via Zoom and [trying to] make music in these unusual situations."

In August, METALLICA broadcast a show to hundreds of drive-in and outdoor theaters across the U.S. and Canada, as part of the "Encore Drive-In Nights" series. The concert was filmed nearly three weeks earlier, on August 10, at the Gundlach Bundschu winery, about a 30-minute car ride from the band's headquarters in San Rafael, California, and was subsequently edited and mixed by the band's award-winning production team to the highest standards possible.

METALLICA's "Live & Acoustic From HQ: Helping Hands Concert & Auction" was streamed live from the band's headquarters in November. The special acoustic show benefited METALLICA's All Within My Hands foundation.