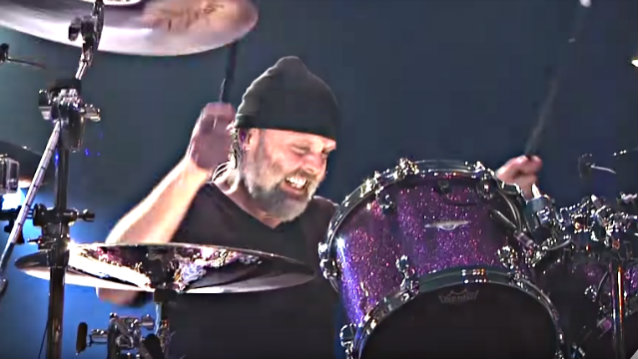 Official video footage of METALLICA performing the song "Enter Sandman" on February 12 at the Hollywood Palladium in Hollywood, California can be seen below.

The intimate concert at the Hollywood Palladium — for around 3,000 or so fans — was held just hours after METALLICA powered through technical difficulties during a special duet with pop superstar Lady Gaga at the 59th annual Grammy Awards.

METALLICA has announced the European leg of its "WorldWired" tour in support of the band's new album, "Hardwired… To Self-Destruct". The trek kicks off with two shows in Amsterdam at the Ziggo Dome on September 4 and September 6. Norway's KVELERTAK will be support for the tour run.

The North American leg of the "WorldWired" 2017 tour kicks off on May 10 in Baltimore, Maryland and will hit stadiums in 25 cities before winding down in mid-August. Support on the quartet's first North American trek since 2009 will come mainly from AVENGED SEVENFOLD and VOLBEAT, with GOJIRA taking over for the latter group for the last six shows.

"Hardwired... To Self-Destruct", METALLICA's first all-new studio effort in eight years, went to No. 1 in 58 countries, including the U.S., where it topped The Billboard 200 album chart.