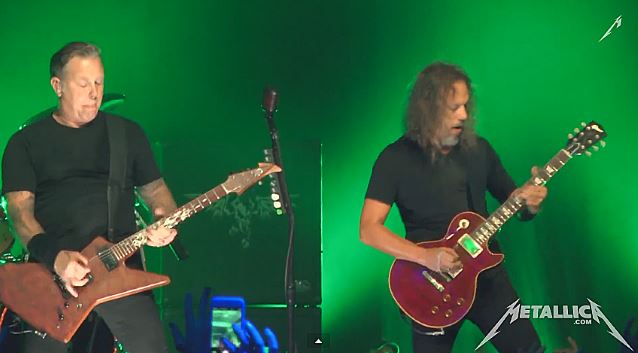 On February 9, METALLICA played a corporate gig at Pier 48 in San Francisco at a party hosted by Salesforce.com, a cloud computing company that provides cloud-based applications and solutions for businesses to enhance their sales and customer service capabilities. METALLICA, who previously played at Salesforce.com's annual convention called Dreamforce in 2011, got involved through guitarist Kirk Hammett's friendship with the company's chief executive officer Marc Benioff, who is his neighbor.

Official fly-on-the-wall footage shot by the MetOnTour reporter at the February 9 concert can be seen below. The clip includes footage of the band warming up in the tuning room, and "Welcome Home (Sanitarium)" from the show.

METALLICA's setlist for the concert was as follows:

Before METALLICA agreed to its gig for Salesforce.com in 2011, the band stipulated that several hundred members of its fan club be allowed to attend free.

After that concert, one fan wrote on a forum: "Everyone is just pretty much standing there motionless with their cameras out."

Marc Benioff was described by Business Insider as "one of the most flamboyant, generous, larger-than-life personalities in the tech industry."

Salesforce.com wasn't METALLICA's first corporate gig — the band played a party in Los Angeles thrown by Activision in 2010 to promote the release of the new video game Call Of Duty: Black Ops.

Corporate concerts like this have been known to fetch anywhere from $500,000 to $1 million for artists.

METALLICA is currently working on material for its tenth studio album for a tentative late 2015/early 2016 release. The new CD will follow up 2008's "Death Magnetic".

METALLICA has spent a lot of time outside the studio in 2014, with activities that included a string of European all-request shows last summer, being guests of honor at a film festival, and playing a week-long residency on "The Late Show With Craig Ferguson".

Great private party last night! Thanks @salesforce for making it a #dreamjob every day! @Metallica was awesome! pic.twitter.com/hZIFRs3n0n

My selfie with @Metallica at a @salesforce work party. Surreal! Thanks @Benioff! pic.twitter.com/iFzYZuf8Ab

A huge MAHALO to @Metallica for blowing the roof off the @salesforce party last night! #dreamjob pic.twitter.com/wLedjzC9iR