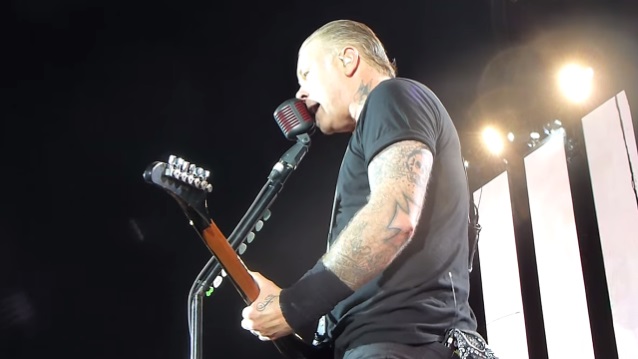 METALLICA's official YouTube channel Metallica TV has been updated with fly-on-the-wall footage shot by a MetOnTour.com reporter on July 4 in Basel, Switzerland. The 22-minute clip includes footage of the band warming up in the Tuning Room and "Ride The Lightning" and "Sad But True" from the show.

The band's setlist for the concert was as follows:

As previously reported, METALLICA stars in the latest ESPN "This Is SportsCenter" ad. The clip, which debuted on Monday night (July 14) during this year's All-Star Home Run Derby, plays off the idea that the band members don't know what to do with themselves since Yankees star reliever Mariano Rivera retired last season and took his "Enter Sandman" entrance music with him — so the band begins a desperate search for something else to do.

Drummer Lars Ulrich said, "Sometimes it can be quite freeing to put yourself at the mercy of others. ESPN's commercials have a tendency to be hilarious. We were like, 'That sounds like a good time.' The whole thing had an overriding impulsivity to it."

The commercials, which debuted in 1994, are presented in a deadpan mockumentary style, lampooning various aspects of sports and sports broadcasting.