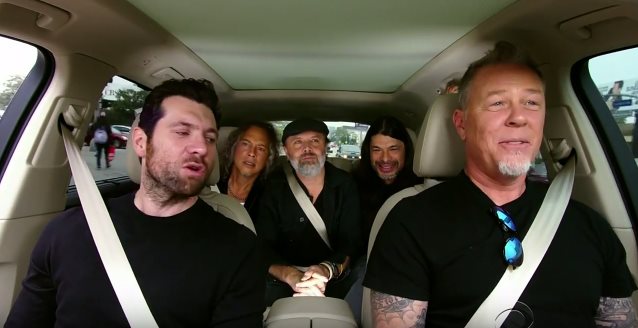 A new preview clip from the episode of "Carpool Karaoke" featuring METALLICA can be seen below.

"A few of you who watched the Grammys back in February may have noticed during one of the commercial breaks that we took a spin around the Los Angeles area with comedian and actor Billy Eichner," reads a post at METALLICA's official web site. "With James behind the wheel, we did a little backseat driving and singing and even made a pit stop for some grocery shopping! We know this has been on your radar for some time and are happy to report that our episode of 'Carpool Karoke' will see the light of day next week on Tuesday, August 15, Apple Music."

Talking about his experience, Eichner said, "This was the best day ever. I was very nervous about it, because it's METALLICA. We don't have a lot of overlap in life, me and METALLICA... I grew up watching them on MTV. But when you meet them, they're still rock stars for sure, but they're also dads... We had the greatest time."

"Carpool Karaoke: The Series" is being rolled out in partnership with Apple Music, where episodes premiere exclusively through the tech giant's $10-a-month streaming service. The show features sixteen celebrity pairings riding along in a car as they sing their favorite songs.