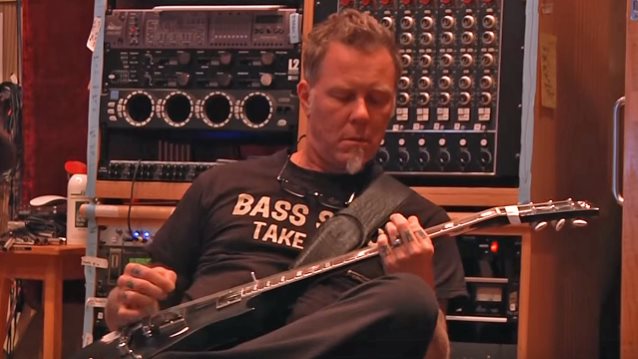 METALLICA has released a new nine-minute video clip featuring footage from the writing and recording sessions for "Sawblade", the song that later became "Am I Savage?". The track is taken from METALLICA's latest album, "Hardwired… To Self-Destruct", which debuted at No. 1 on The Billboard 200 album chart on November 27, selling 291,000 copies in its first week of release.

METALLICA previously released an official video for "Am I Savage?", featuring a man who moves through stark scenes surrounded by family, coworkers and others who all wear white body stockings that disguise their faces.

The "Am I Savage?" video was directed by the Brooklyn-based high-art photography duo Herring and Herring, who photographed METALLICA for the "Hadwired… To Self-Destruct" album package, and also helmed clips for "Halo On Fire" and "Now That We're Dead".

Instead of a previously announced bonus disc of demos, the deluxe edition of the album features a number of cover tunes that the band has recorded over the past few years, including a medley of Ronnie James Dio songs, IRON MAIDEN's "Remember Tomorrow" and DEEP PURPLE's "When A Blind Man Cries".

The deluxe version also features a live set recorded at Rasputin's in Berkeley, California on Record Store Day 2016 and a concert version of the song "Hardwired" recorded at U.S. Bank Stadium in Minneapolis.