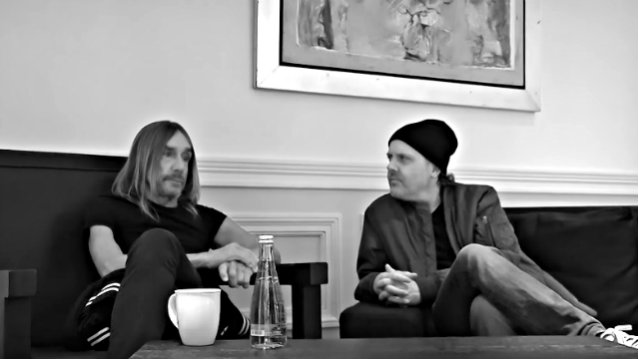 When Iggy Pop opened for METALLICA at three Mexico City shows last month, the singer sat down with METALLICA drummer Lars Ulrich for an in-depth chat that covered working with their mutual friend, Lou Reed, as well as playing on the same bill together, the record label they used to share (Elektra) and the artist Jean-Michel Basquiat, among other topics. The full interview is available at Metallica.com. A few video clips of the chat can be seen below.

Speaking about METALLICA's collaboration with Lou Reed, Ulrich said: "It was the 25th anniversary of the Rock And Roll Hall Of Fame, and Jann Wenner [Rolling Stone editor and publisher] threw this big celebration at Madison Square Garden, and his idea was to have a few bands anchor some segments, so he had [Bruce] Springsteen anchor a segment with some different people, and U2 anchor a segment, and he asked us to anchor a segment, which we were very flattered and pretty humbled by. We ended up doing a few songs with Ray Davies, a couple songs with Ozzy Osbourne, and then Lou. Lou showed up at rehearsal, this is about two days before, and we're in a nice comfortable New York rehearsal space, and Lou walks in literally with dark clouds, and thunder and lightning over his head. He was pissed off! All 'This is not right,' and 'What the fuck?' and all this type of stuff. And we were like, 'Well, should we do this, should we do this? Should we do a medley?' He said, 'I don't fucking do medleys.'… You know, the gauntlet's now thrown down. And then Lou and I went off in the corner of the room and had a nice 10-15-minute chat about a few things, and then we sort of found some common threads. From there on he was fine. I think he had kind of a defense mechanism that was always 'on' to keep people at a distance, and you had to sort of break through that. And once you broke through that, then it was cool. But it was like a test."

He continued: "We ended up playing two or three songs, and it was fucking magic. And when we did it at Madison Square Garden in front of not just the audience but also the peers, you know, all the other bands, he was so into it. As we walked out of the bowels of Madison Square Garden and walked our separate ways, he was, like, 'We should make a record together one day. Come on. You know, let's do something!' It was, like, 'Lou, just fucking call us. We're easy to find.' And then lo and behold, a month or two later he called. He had this whole idea, these lyrics, this play and this whole German thing and Lulu."

Ulrich added: "For us, what was so interesting was that when we write, everything's about the music first. You know, the riffs, the swing, the arrangements, all that kinda stuff. And then with [James] Hetfield, the last things are the lyrics and the vocals, I wouldn't call them an afterthought but it's the last thing, the dressing. So Lou sent us ten sets of lyrics. And it's like, 'Write music to these lyrics,' and we had never done that in 30 years! That was such a challenge. It was so cool to be out of our element at that level. Then James and I sat there for a week or two and tried to come up with music that would fit our interpretation of the moods of his lyrics. We sent some stuff to him, and he called up and was like, 'Fuck, this is insane.' And then we went on this journey together for like the next six months. We made the record and we went and played television shows all over Europe, it was a whole thing."