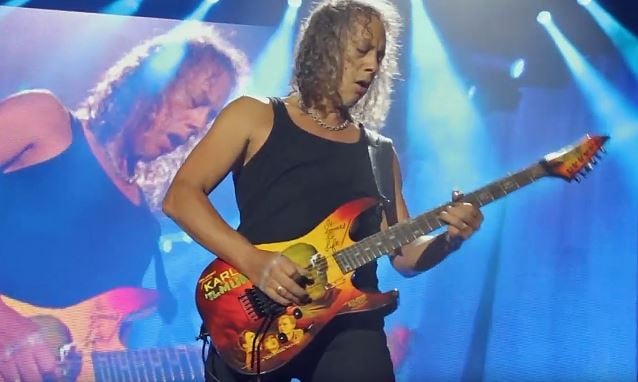 METALLICA guitarist Kirk Hammett was interviewed on the December 19 edition of "Whiplash", the KLOS radio show hosted by Full Metal Jackie. You can now listen to the chat using the widget below. A couple of excerpts follow (transcribed by BLABBERMOUTH.NET).

On preventing his creative enthusiasm from getting overwhelmed by sorting through the sheer volume of ideas while writing a new METALLICA album:

Kirk: "I've been a musician for most of my life. I've been playing guitar for four decades now. And it seems that after a while, you reach a point where the ideas flow, they come quickly — or they don't. But after a time, you kind of get a backlog of ideas. And at that point, if you've been a working musician for a long time, one of the most difficult things to do is to be objective about your own work — or subjective; whatever you need to be. And a lot of time it's really, really difficult to just ascertain what is better than something else musically, because a lot of times, when it comes from the same source, you kind of stamp everything with that same stamp of approval. And so it helps when you have other bandmembers around, or you're surrounded by producers, engineers, whatever, who tell you, 'That's a good piece of music, but that is not.' I mean, it really helps. Having said all that, I think that it's pretty obvious when an idea comes on the floor and it's instantly, 'All right. This idea is way better than anything else we have,' and it instantly just floats to the top."

On when he first started feeling comfortable, as a guitar player, that his own style was starting to emerge:

Kirk: "Woah… Maybe a couple of weeks ago. [Laughs] You know, it's funny, because as a dedicated musician, as a dedicated guitar player, I pick up my guitar, I play day in, day out. I'm very conscious of what has happened before my time, what has happened during my time and what has happened in the now. And I'm very conscious of how I fit in into all of this. My whole attitude has been pretty much the same from the onset, ever since I first started playing: pick up your guitar, work hard to improve yourself and grow, and be open to new things and just try to be a sponge, and filter in all the good stuff and try to keep out all the bad stuff. I've been doing that pretty much my entire musical life, my entire musical career, and I've just been keeping to what sounds good to me instinctually and never losing sight of what inspires me and who inspires me, what influences me an what does not influence me. And through all that stuff, every time I play guitar, it's the accumulation of all those things I've just mentioned. And when I play my guitar, that's me — that's my personality. And concurrently, people have come up to me and said, 'Kirk, you're doing a good job. You have your own sound.' And for me, it's hard for me to hear my own sound because I'm so close to it — I'm in it, you know; it's me. And so when I hear other guitar players coming to me and saying, 'You have your own sound. I can always tell when you play.' People have been telling me this ever since [METALLICA's debut album] 'Kill 'Em All'. And so, for me, that's one of my main goals as a musician — just to have my own sound. And I don't know how it happens. All I know is that I just really try to work in trying to be an individual and try the best that I can be as a guitar player, and somehow, along the way, my personality and my identity has come through in my playing, and I'm very thankful for that. And I'm very appreciative of the fact that other people can hear my personality in my guitar."

METALLICA has shows booked in Denmark, Mexico and South America over the next three months, but has yet to unveil its full 2017 tour plans, including its first North American tour in eight years.

"Whiplash" airs every Sunday night from 9:00 p.m. to 11:00 p.m. on the Los Angeles radio station 95.5 KLOS. The show can be heard on the KLOS web site at 955klos.com or you can listen in on the KLOS channel on iHeartRadio. Full Metal Jackie also hosts a nationally syndicated radio program, which can be heard all over the country. To see a full list of stations carrying Full Metal Jackie's show and when it airs, go to FullMetalJackieRadio.com.