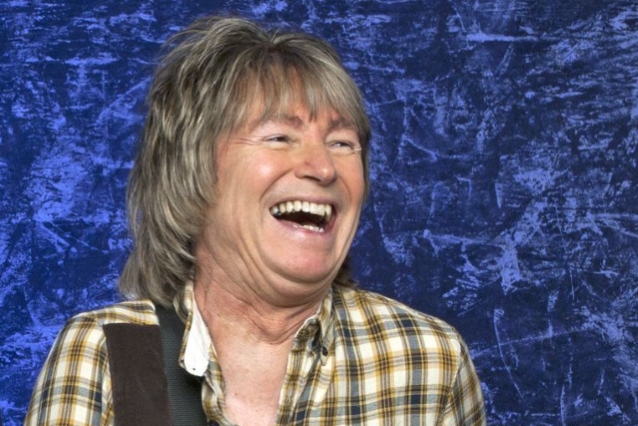 UFO is scheduled to make a series of European festival appearances this coming June and July, with a U.S. tour slated for October.

The band's current lineup includes original members Mogg and Parker, as well as Vinnie Moore (lead guitar), who joined in 2003, and Rob De Luca (bass), a member since 2012.

UFO is considered one of the classic hard rock acts, and was ranked No. 84 on VH1's "100 Greatest Artists of Hard Rock."

I've just heard the sad news of Paul Raymond's passing
I won't pretend that we were always the best of friends but i am...

“Literally, as my tribute to UFO show on Planet Rock was being broadcast, the news broke that Paul Raymond, their...

We are saddened to hear the news this morning of our friend and touring mate Paul Raymond of UFO's sudden passing.

Judas Priest send their love to Paul Raymond, his family and fans. We played many shows with UFO and remember Paul as a brilliant musician and friend - may he rest in peace....

"I am very sad to hear of the passing of Paul Raymond of UFO. We were friends and he was an extremely talented musician and a real good guy. RIP" ........ Brian Wheat

We woke up to the very sad news today that Paul Raymond passed away.

"It is unbelievable. Paul Raymond was a great...

NO! He just finished a tour this week! Oh man... I was really looking forward to seeing him with UFO upcoming here in...

The UFO family and music community is mourning the loss of the multi talented and secret weapon Mr. Paul Raymond.
I...

Absolutely gutted. #PaulRaymond performed and wrote on some favourite albums ever with UFO and MSG (Michael Schenker Group). A truly brilliant musician. Really underrated. Sad day for rock’n’roll. We are losing all the original heroes one by one. ?
R.I.P. Paul Raymond. ? pic.twitter.com/JKFp51KILU

Condolences to the UFO family and Paul Raymond’s family and friends:( R.I.P. Paul???

Paul Raymond was the #mvp of #ufo and I am thankful for his music over the past 30 plus years.… https://t.co/UW37ee1Hfk

R.I.P. PAUL RAYMOND I was a big UFO fan as a kid- Paul’s grinding B3 on “LIghts Out”, and his gorgeous Rhodes work on “Love To Love” inspired me- The piano section in the DT song “Lines In The Sand” is derived from “Love To Love” ? R.I.P. Paul pic.twitter.com/e65gGh00Oo

#Rip Paul Raymond Of @UFO_rockband One Of my all time favorite bands , I had a UFO club in High school and they were my band.
Rock In Peace Paul !!! pic.twitter.com/dmOVrpuzuz

So sad to hear of the passing of UFO keyboardist/guitarist/writer Paul Raymond. We only met once when Megadeth played a festival together in summer 2017 and he was such a kind and… https://t.co/pki9hnj2eU

We are so sorry to hear about the passing of Paul Raymond. Our thoughts are with his family and those close to him. RIP Paul https://t.co/2t7ulQkAVb

I was shocked and saddened to hear the news of Paul Raymond’s passing this morning. We just performed on the same stage a week ago and traveled throughout UK/Ireland for a month. A sweet man indeed. My condolences to the wonderful UFO team and Paul’s family, friends and fans. RIP

"Me and Paul (Raymond) backstage in October in Germany. RIP my mate x" pic.twitter.com/sArENpaV7J