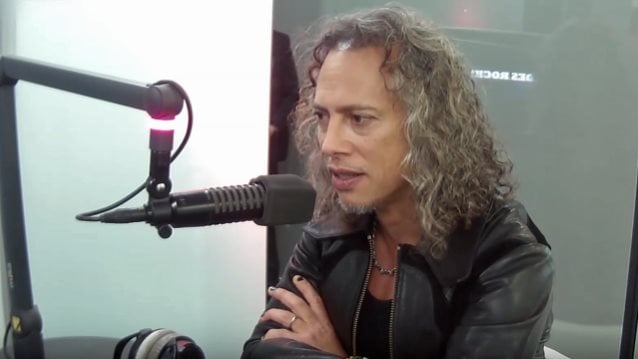 METALLICA guitarist Kirk Hammett was interviewed by Germany's Radio 21 last November during the promotional tour for the band's new album, "Hardwired… To Self-Destruct". You can now watch the chat below.

Asked if he thinks "Hardwired… To Self-Destruct" is one of the best albums METALLICA has ever made, Hammett said: "I always think that our albums are the best albums that we've ever made… They all have their own special relationship to us. I mean, all the albums kind of mean different things to us. For me, this album is special because… just by the fact that we actually got it out [laughs], it feels like a huge accomplishment. But this album, for us, it's special in that… If you can call 2008's 'Death Magnetic' a return to form, then you can call 2016's 'Hardwired… To Self-Destruct' as more of that. We reached backwards in the intentions of creating something new, first with 'Death Magnetic', and we did this again with this album — looking backwards in the attempt to create something new. And, as a result, when I listen to this album, it has elements of 'Kill 'Em All', 'Ride The Lightning', 'Master [Of Puppets]', '…[And] Justice [For All]', 'Black' album — I hear all that stuff — but it's still unique and it's still different. And so, in that regard, how I see this album is that it's a perfect musical statement for where the band is at in this point of time in the 21st Century."

Regarding why it took so long for METALLICA to release a follow-up to "Death Magnetic", Hammett said: "Well, going back to 2008, when 'Death Magnetic' was released, we toured behind that album for about two or three years. And then, after that, we did the Lou Reed thing [2011's 'Lulu' album collaboration], and then after that we did [the] 'Through The Never' [METALLICA movie project], and by the time we finished 'Through The Never', it was, like… I don't know… 2014 or something, and that was, like, six years at that point. Around 2014 is when we decided to start working on the album and recording it, and that in itself took two years. And so the years just started to add up over time, and before we knew it, by the time we finished this album, it had been eight years. And I admit, eight years is just way too long to wait for anything, whether it's an album or whatever — eight years is just a long time. And hopefully when we get time to make the new album in two, three, four years or whatever it is, it'll be a lot faster, because I will have had all those other riffs that I didn't use for this album for the next album."

METALLICA frontman James Hetfield revealed on the British radio station Planet Rock that "life things" kept Hammett from contributing to the writing of "Hardwired... To Self-Destruct". He said those things kept Hammett out of the studio for much of the recording, but wouldn't say more. He left that up to Hammett, who wasn't with him.

METALLICA has shows booked in South Korea, China, Singapore, Denmark, Mexico and South America over the next three months, but has yet to unveil its full 2017 tour plans, including its first North American tour in eight years.