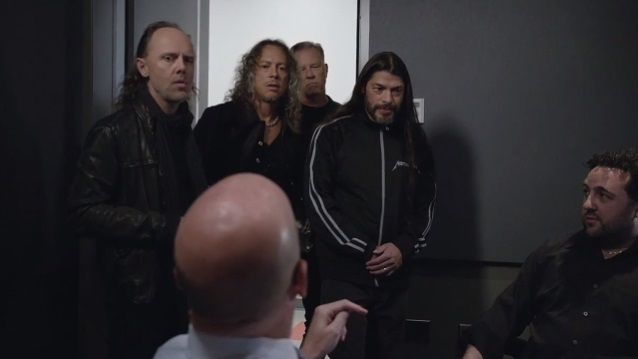 METALLICA is featured in the latest in ESPN's long-running line of "This Is SportsCenter" ads, which take a whimsical and bizarre angle on the legendary show’s behind-the-scenes productions. According to RollingStone.com, the new commercial, which will air during tonight's Home Run Derby, clip plays off the idea that since Yankees relief pitcher Mariano Rivera retired at the end of last season (taking his "Enter Sandman" entrance music with him) they don't know what to do with themselves, so they have started coming up with their own ideas.

"Sometimes it can be quite freeing to put yourself at the mercy of others," METALLICA drummer Lars Ulrich told RollingStone.com about making the ad. "ESPN's commercials have a tendency to be hilarious. We were like, 'That sounds like a good time.' The whole thing had an overriding impulsivity to it."

60-year-old NFL analyst John Clayton starred in 2012's popular ESPN "This Is SportsCenter" commercial that purported to reveal that he actually rocked a gnarly ponytail, headbanged to SLAYER and still lived with his mother.

"This is SportsCenter" is the name of a series of comical television commercials run by ESPN to promote their "SportsCenter" sports news show. The ads are presented in a deadpan mockumentary style, lampooning various aspects of sports, and sports broadcasting. The commercials debuted in 1994. The New York office of advertising agency Wieden+Kennedy, of Portland, Oregon, is responsible for the writing and production of the commercials.