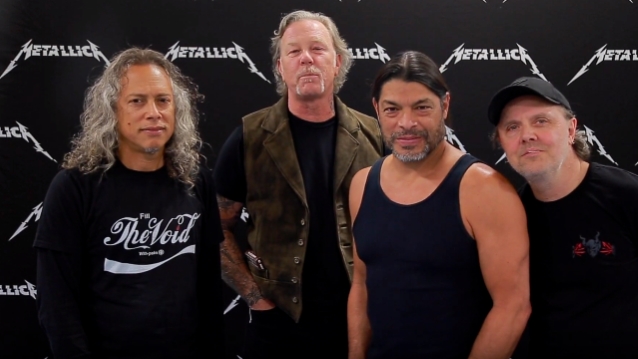 The donations were made over the course of 25 shows through the band's non-profit foundation All Within My Hands, which was established in 2017 as a means to invest in the people and places that have supported the band.

METALLICA's final summer 2019 contribution came on August 25 in the form of a 63,000-euro check to Freezone Mannheim, an organization offering low-threshold youth welfare services in Mannheim to children, adolescents and young adults living entirely or partially on the streets.

The band tweeted out a photo of the four METALLICA members and three Freezone Mannheim representatives holding a check, along with the following caption: "A HUGE thanks to all who attended a #WorldWired European show for helping us donate over €1.5million to local charities over the course of the 25-show tour. And special thanks to #MetInMannheim fans for wrapping it up with this contribution to Freezone. #MetallicaGivesBack #AWMH"

In its first six months of operation, All Within My Hands donated more than $750,000 to local food banks around the world — a practice the band and the Foundation continued on METALLICA's recent North American and European tours. They've donated at least $10,000 to local food banks in every city and met dedicated people who focus their daily lives on helping others.

Back in May 2018, METALLICA drummer and co-founder Lars Ulrich visited the San Francisco-Marin Food Bank to give a helping hand alongside some dedicated and loyal METALLICA fans and hard-working volunteers.

Ulrich created a PSA for the food bank in partnership with All Within My Hands. He urged locals to offer a helping hand to those suffering from hunger.

A HUGE thanks to all who attended a #WorldWired European show for helping us donate over €1.5million to local charities over the course of the 25-show tour. And special thanks to #MetInMannheim fans for wrapping it up with this contribution to Freezone. #MetallicaGivesBack #AWMH https://t.co/PwKoKuKtyI