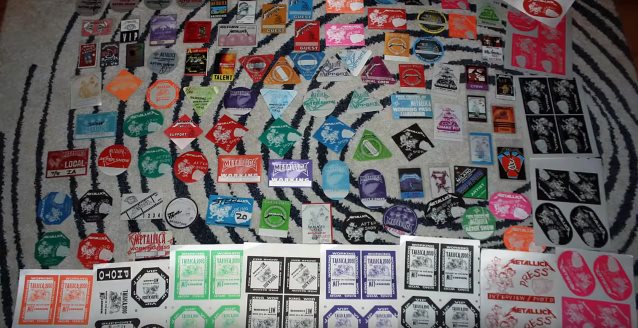 A three-minute video clip showcasing a Canadian METALLICA superfan's collection of band-related memorabilia can be seen below.

A native of Toronto, Ontario, Doug Brown has amassed a huge amount of METALLICA collectibles since he was a young boy, and the band was so "blown away" by the items he has acquired that they interviewed him for their YouTube channel before their November 2016 concert in the city.

Brown says: "I started collecting at a very young age. My cousin got me a copy of the 'Black Album' on cassette. And then I was interested in the music so much, I wanted cassette singles and I started finding part-time jobs just so I could start buying more and more things.

"One day I was at a shop in downtown Toronto and I picked up a vinyl copy of 'Ride The Lightning', and it looked a little different than my CD copy, and then, all of a sudden, I had two. And then I was, like, 'Okay, I should probably go find a cassette of that, 'cause I don't have that on cassette yet. And that was the point it started to spiral out of control. So I started importing from all around the world. When the eBay factor kind of came into play, I realized I could get promos and I could start getting every single country of origin possible."

Brown says he has eight hundred and fifty vinyl and CD variations of METALLICA items and "another two to three thousand pieces of METALLICA memorabilia from all around the world." Included in his collection are "very rare test pressings," uncut clear picture discs, Cliff Burton autographs and his most prized possession, the original cassette copy of the "Black Album". "That's the very first cassette I ever got when I was eight," he said. "It's absolutely worthless and it's beat to shit and I bet it wouldn't even play. I have ten thousand records in my house of all different types of music, but without that one cassette, I probably wouldn't have gone down this journey."