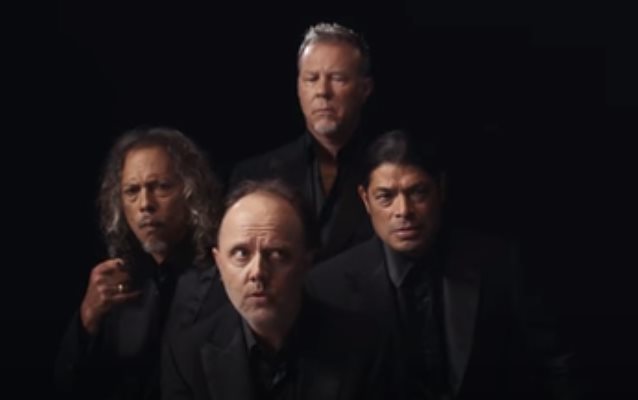 METALLICA is featured in a new advertising campaign for the Italian luxury menswear house Brioni. According to Business Of Fashion, the campaign was shot in black-and-white and features two portraits of the four members of the band — one in black tuxedoes, one in white tuxedoes. The company's logo is done in gothic lettering, perhaps as a nod toward the heavy metal musicians in the ads.

METALLICA said in a statement: "We are beyond thrilled to have been invited to be the face of Brioni as they kick off their first creative campaign under the direction of newly appointed creative director, uber-cool style star Justin O'Shea."

The photos, which the band says were inspired by pictures taken of QUEEN around the time of their single "Bohemian Rhapsody", were shot last month in San Francisco by photographer Zackery Michael.

Behind-the-scenes footage from the photo shoot can be seen below.

The band adds that they are "sporting Bespoke Brioni suits and tuxedos as well as sunglasses from their new eyewear collection."

The campaign will be distributed on social media channels and will appear initially on billboards and kiosks in Paris and in The New York Times. Wider print distribution and billboards in New York, Los Angeles and Moscow will follow in the autumn.

METALLICA recently completed recording its new album at its headquarters in San Rafael, California and has now begun mixing the new disc, which is expected out before the end of the year.