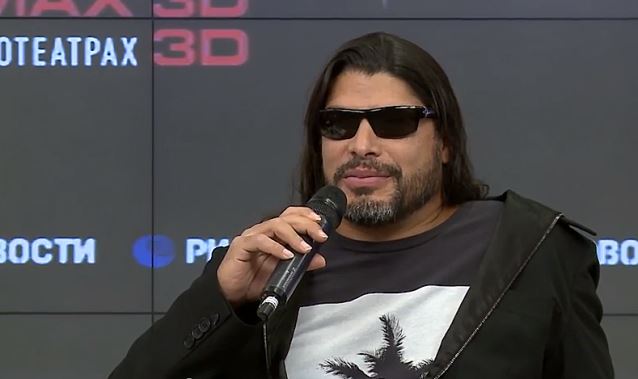 When METALLICA's new movie, "Metallica Through The Never", opens in 3D IMAX today (Friday, September 27), fans will see the band performing on a massive stage, specially constructed for the film, that incorporates elements of METALLICA live shows from the past 30 years. LA Lloyd of the Austin, Texas radio station KLBJ-FM asked bassist Robert Trujillo if there is any chance of taking that stage show on the road. "That is the plan," he said (hear audio below). "But we won't do that until we finish recording a new record. We need a new album."

He continued: "We started working on new music earlier in the year, and it was really fun; we had a great time. Lars [Ulrich; METALLICA drummer] was even saying that it was the funnest time that he had jamming with METALLICA.

"There's a great sense of unity right now in the band; we're firing on all cylinders.

"We've had a lot of challenging moments on stage, we changed the setlist every night, we played some major events. We had a special anniversary… It was about a year ago, at the Fillmore in San Francisco, we played four shows for the 30-year anniversary, and we actually… Again, us being crazy, we flew in people like Rob Halford [JUDAS PRIEST] from Birmingham, England to sing one song with us. We had members of DIAMOND HEAD there, we had MERCYFUL FATE, with King Diamond, [who] came out from Denmark. Geezer Butler and Ozzy Osbourne, we flew them in, from BLACK SABBATH, to do a medley of SABBATH songs with us. We had Glenn Danzig. I mean, it was crazy. Lou Reed came out, too. It was four nights of that, and it was a celebration for our fans. And again, going back to the idea that we're not making any money off this — I mean, Fillmore is a small place, and we're flying people in, and we've gotta put them up. But again, at the end of the day, it's for our fans. And I always think that that's why people really connect with us, because we're kind of crazy like that. And at the end of the ay, I think it translates into positive energy.

"But again, the reality is we've gotta make a new album. We'll take the stage out a few years down the line if there's a demand — kind of the way Roger Waters took his production out."

METALLICA reportedly spent $20 million of its own money to make the "Metallica Through The Never" film, which was screened at Fantastic Fest in Austin, Texas this past Wednesday (September 25).