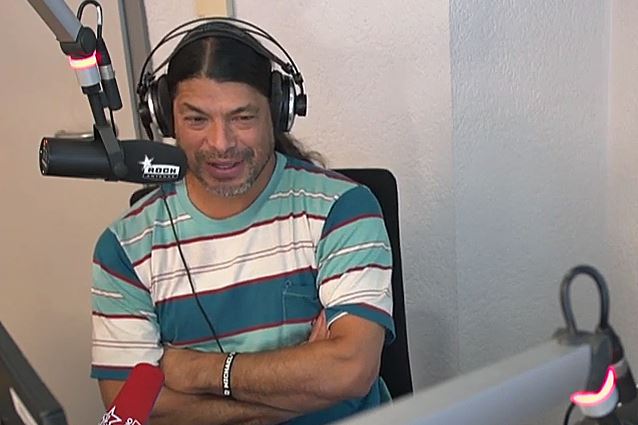 Germany's Rock Antenne recently conducted an interview with METALLICA bassist Robert Trujillo. You can watch the full chat below. A few excerpts follow (transcribed by BLABBERMOUTH.NET).

On the actual amount of time the band spent putting together "Hardwired… To Self-Destruct":

Robert: "It's a long process because the riffs started eight years ago. A lot of the ideas are born in our jam room which is our little space that we have before we go onstage. With James Hetfield [guitar/vocals], every second he's coming up with a great riff. We have to record and document that because he will forget that riff. Then ideas are prepared at home. But really, two years was the focus on when we started to dive into the songs and arrangements and then record."

On whether humanity is on a path of self-destruction:

Robert: "I hope not. The great thing about METALLICA's music and the lyrics, it's always going to be hopefully a motivating experience. James came up with the title. He was in a conversation with a friend of his and they were talking about how as men just making mistakes and the wives, as we say, 'get on your case' about making mistakes. It could be anything; it could be losing your keys, or whatever, just doing something stupid. The idea was, 'Man, maybe as men, maybe we're hardwired to self-destruct.' That grew into 'hardwired for anything.' 'Hardwired to eat cheese pizza.' 'Hardwired' preceding any other word you want. It made great sense and it stuck. Usually for an album title we'll sit around and we'll throw a bunch of ideas together, but this one was pretty immediate. It turned into the title of the record."

On whether METALLICA had the double-record idea in mind when they started songwriting:

Robert: "Yes and no. I call it a process of elimination. You're nurturing ideas and that takes time. What happens is there's so many, what I say, 'great ideas.' What you have to do is try to consolidate them and put them into one song and then your song becomes eight minutes long. Then you have over 80 minutes of music. Then you need to have two CDs. It just turns into that. I don't think it's planned that way. I just think that right now, it feels right to have these arrangements the way they are. So often your management tells you 'Three minute songs!' You say 'Impossible!'"

On how METALLICA manages their family life with their touring schedule:

Robert: "It's very important to us, family, and the balance of family within the band is probably the most important. METALLICA is important, but when you have your wife and your kids and you need to maintain that and keep the peace. It's important to work around the schedule of the kids' schools. We do basically two weeks on, two weeks off in our schedule. It's costly. It costs more money, of course, but at the same time, it keeps the peace of all the band members and in our better halves. Again, it's just balance. It's important to us to stay connected to our kids because happy wife/happy life, happy family."

On how much input he had on "Hardwired…To Self-Destruct":

Robert: "Actually, a lot. A hell of a lot. What we do is even though when you read, a lot of people like to read credits and obviously on 'Hardwired' compared to 'Death Magnetic', there's writing credits that are really centered around Lars [Ulrich] and James. The truth is that we jam. Even though the original riff, or the idea comes from Hetfield on this album, these are all great Hetfield riffs. You don't see the riffs from Kirk [Hammett] or myself as much as you would have on the previous record. I'm there everyday jamming and I'm writing my bass parts. I'm playing my parts as bass parts. What determines a songwriter's [credit], you have to ask Lars. [Laughs] That's okay.

"I always say my role in METALLICA is to support the song and to support my team and whatever that means, I'm there for it. I'm like Joe Walsh with THE EAGLES. Joe Walsh with THE EAGLES was a songwriter, he did a lot of great things, but when it came to THE EAGLES, he was there to play guitar, he was there to sing, he was there to do whatever he needed to do. If he had to write sections, he did. The great thing about 'Hardwired', I do love the songs, I love the sonics, the sound, the production, I love the fact that I was able to go into the vocal booth with James and sing back-ups and be a part of the vocal production on that level, which is something I don't think had ever happened. There's a lot of really great experiences with this album. It's really the second step in me being with this band creatively. It's the second step because 'Death Magnetic' was really the first, coming in with [producer] Rick Rubin and taking the journey with Rick and [engineer] Greg Fidelman being a part of that. Now with Greg Fidelman as the producer and myself still there, it feels free. It feels new. I'm looking forward to the next record in this journey. Songwriting credits… it's not a big deal. I think what the bigger deal is like how the songs develop and my role in supporting Lars and James with a song, whether the idea comes from Kirk or James or me, or whatever, it doesn't matter. What matters is does the song sound great when it's finished?"

On whether METALLICA is a band or an "industry":

Robert: "METALLICA is a band. We enjoy what we do. We create. At our age and where we're at now, it's impressive. I've been in this business a while and I've seen a lot of bands who get a little bit older, they lose some of that fire and edge. In all honesty, they lose their creativity. The scary thing is I think we're growing together now more than ever creatively, which is really exciting. Already there's been a couple of loose jams that for me, have been like 'Whoa. That's pretty good.' I know there's another great album probably waiting to happen. I know that drives Lars crazy because it took a lot to make this one. Creatively, I see it, I feel it. I'm excited about where we're at and where we're going. Music comes first with us. Let me say this: In the last eight years, it took a long time. There's a lot of reasons. We made an album with Lou Reed ['Lulu']. That took a year. We made a 3D movie called 'Through The Never'; that took two years. And we also toured for 'Death Magnetic' and we did some other special shows, celebrating 'Ride The Lightning' and the 'Black Album.' We challenge ourselves. I think that makes us better."

Released on November 18, "Hardwired...To Self-Destruct" consists of two discs, containing a dozen songs and nearly 80 minutes of music. The long-awaited follow-up to 2008's "Death Magnetic" was produced by Fidelman with Hetfield and Ulrich. The band recorded the disc at its own studio.