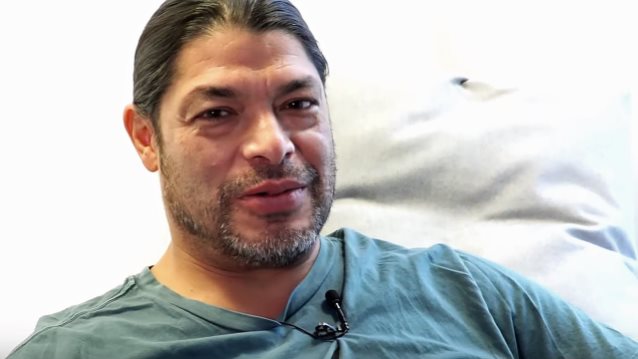 France's Metal XS recently conducted an interview with METALLICA bassist Robert Trujillo. You can now watch the chat below. A couple of excerpts follow (transcribed by BLABBERMOUTH.NET).

Robert: "Well, you know, any band that you have, any relationship in your life is gonna come with moments of tension. I think the great thing about this band and where we are now is we have learned to communicate better, and that's important. It's kind of like, for me and my position, I'm with Lars [Ulrich, drums] and James [Hetfield, guitar/vocals] ninety percent of the time when we're playing this time, when we're jamming, and it's great. It's an honor for me to be there, because I learn from every situation, and I've learned a lot from Lars and James, so I'm a part of the energy. You know, if it's James's idea, that's fine, if it's Kirk's idea, whatever, that's fine too, if it's mine or whatever, but I'm always there to support the song. And I think I'm there to supply a foundation for James's idea with the drums, as a bass player, which is important for what we're doing now. We all live in different places — we're not living in the same city anymore — so it's not always that easy. Kirk's… oftentimes he's out in Hawaii, and everybody's in different locations. I think, at the end of the day, when you hear a Kirk guitar solo, it's Kirk — it's his personality, it's his statement, [and] there's magic in that. We're all individually kind of unique players, so that magic still is on the song, no matter who wrote it. So I always think to myself, even if it's not a Kirk idea, or a Robert Trujillo idea, or if it's a Hetfield idea, you can't go wrong, number one, 'cause it's gonna be a great riff. James is a very strong riff writer — it's proven — but our job is to really honor the song and the idea and do the best we can with it. I've been asked that question: 'Oh, there's not as many ideas coming from Kirk,' or whatever, but his presence is there, and the spirit of what he does is always there, 'cause of his guitar solos, or my bass, or whatever. So we're still a part of the songs."

On the dynamic between Lars and James:

Robert: "There is a lot of energy between Lars and James, and sometimes that energy can erupt. I know that before I was in the band, Kirk was the guy who was often in the middle, and it was important at that time. And now I feel like sometimes I'm the guy that's in the middle between not just James and Lars, but even Kirk. I feel, in my life, in any situation I've been in, I've always been sort of in the middle. With SUICIDIAL TENDENCIES, there was a lot of intense personalities, and you had to figure out how to balance each guy and where they were at in their mood, or whatever was going on. With Ozzy [Osbourne], there was a lot of intense energy there too, 'cause he was battling a lot of demons. And sometimes you have a writing session, and he doesn't show up, and, of course, you get angry, or you get frustrated, but you have to be cool — he's the boss, you know what I mean? So there's a lot of personalities in any of these situations that you have to balance. In METALLICA, I think it's important that there

"Hardwired… To Self-Destruct" debuted at No. 1 on The Billboard 200 album chart, selling 291,000 copies in its first week of release. The effort consists of two discs, containing a dozen songs and nearly 80 minutes of music.

The deluxe version of "Hardwired… To Self-Destruct" also features a live set recorded at Rasputin's in Berkeley, California on Record Store Day 2016 and a concert version of the song "Hardwired" recorded at U.S. Bank Stadium in Minneapolis.