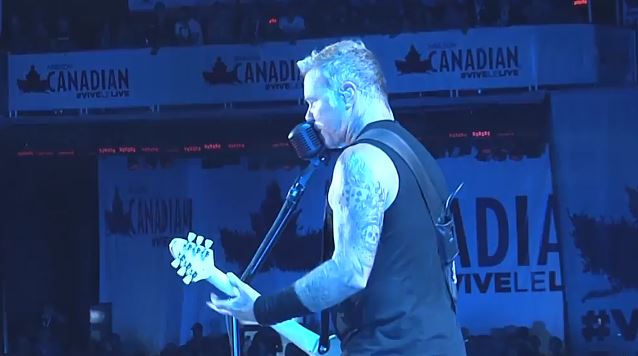 METALLICA's official YouTube channel Metallica TV has been updated with fly-on-the-wall footage shot by a MetOnTour.com reporter on August 9 at the Heavy Montreal festival in Montreal, Quebec, Canada. The 15-minute clip includes footage of the band warming up in the tuning room, the pre-show huddle, and "Battery" and "The Four Horsemen" from the show.

The Heavy Montreal performance marked METALLICA's sole North American date on the "Metallica By Request" tour, which hit Europe and South America earlier in the year. The trek featured the band playing 17 songs requested online by fans in each city, with the final slot in the set list taken by a new song, "Lords Of Summer".

METALLICA drummer Lars Ulrich told Metal Hammer in a new interview that "Lords Of Summer" went over well with fans hearing it live on the band's "By Request" tour. Ulrich explained, "It's fun to play. It seems like the kids are enjoying it. There was actually somebody in the 'Snake Pit' the other day with a homemade 'Lords Of Summer' T-shirt on, which was very endearing."