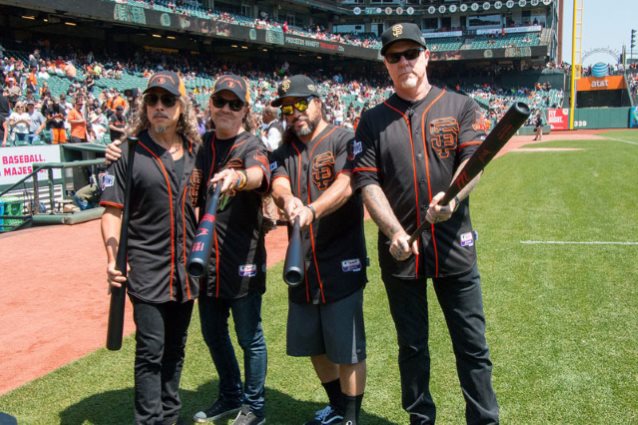 METALLICA and the San Francisco Giants have announced the fifth annual "Metallica Night", to be held on Monday, August 7 at AT&T Park in San Francisco as the Giants take the field against the Chicago Cubs. METALLICA will once again throw out the first pitch and perform a version of "The Star-Spangled Banner". The band said: "We'll be on hand all night to cheer on the orange and black as we take part of some of the between-innings festivities."

Special-event METALLICA ticket packages include a ticket to the game and a limited-edition METALLICA/Giants T-shirt, with a portion of the proceeds from every special-event ticket sold benefiting the Posey Family Foundation. There will also be an exclusive VIP event that night in Triples Alley with METALLICA drummer Lars Ulrich hosting a pre-game question-and-answer session with tennis coach, commentator and author Brad Gilbert to talk sports, music and more. Tickets to that event will also be on sale, again benefiting the Posey Family Foundation. On Thursday, February 9 at 10:00 a.m. PST, there will be a presale for Met Club members. Log in to the site at that time for a link to purchase your tickets to the game early.

The fourth annual "Metallica Night" was held last May at AT&T Park. METALLICA frontman James Hetfield took the opportunity to lead the crowd in singing "Happy Birthday" to Giants Hall Of Famer Willie Mays, who'd turned 85 years old that day, while bassist Robert Trujillo held up a sign with Mays's name during the performance.

METALLICA guitarist Kirk Hammett told ESPN.com that he and all his friends idolized Willie Mays in fourth and fifth grade. He called "Metallica Night" "just a really, really cool thing" that both he and his family totally enjoy. He also said he feels the version of the national anthem he and Hetfield play is "really unique and different," and it's great that they can play it for their home team and hometown audience.