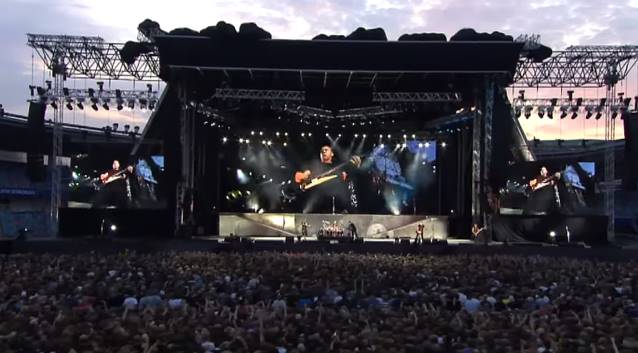 METALLICA, AEROSMITH and AC/DC have made Billboard magazine's list of the 25 highest-grossing touring artists from 1990 through 2014.

The music industry publication ranks THE ROLLING STONES, U2, BRUCE SPRINGSTEEN, MADONNA and BON JOVI as the five acts to have earned over a billion.

Billboard's 25 highest-grossing touring artists from 1990 through 2014:

As previously eported, tickets for AEROSMITH and Slash's upcoming summer trek, dubbed the "Let Rock Rule" tour, are among the most expensive of the season. According to The Street, the average ticket price for the road trip is a whopping $275.85. The most expensive show on the trek comes in Las Vegas at the MGM Grand Garden Arena, with an average price of $385.24 — nearly 40 percent above the tour average.

METALLICA previously made Billboard magazine's "Top 25 Tours Of 2010" list, which was compiled from Boxscore data reported for the November 28, 2009 issue through the November 20, 2010 issue.

METALLICA grossed $62 million from mostly international dates, for the most part wrapping a 200-plus-show tour in support of the band's latest album, "Death Magnetic". With just 33 shows reported during the period, METALLICA drew attendance of more than 700,000.

AC/DC was honored in the "Top Boxscore" category at the Billboard Touring Awards, which were handed out at a special reception in New York in November 2010. The awards were primarily based on global box office numbers reported to Billboard Boxscore from October 1, 2009, through September 30, 2010.

The "Top Boxscore" award recognized the highest-grossing single engagement for the time period. Two of the Boxscore finalists were from AC/DC: a three-night, sold-out stand at ANZ Stadium in Sydney and three more sellouts at Etihad Stadium in Melbourne; both were in February 2010. The third finalist for Top Boxscore was the 2010 Download festival in the U.K.