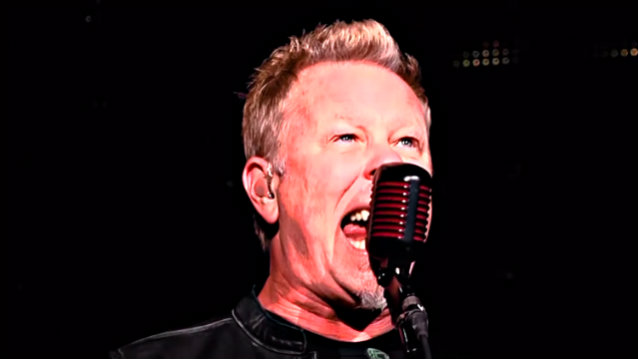 METALLICA has uploaded a 360-degree clip of the "Seek & Destroy" performance from the band's May 19 concert at the Gillette Stadium in Foxborough, Massachusetts. Check it out below.

METALLICA frontman James Hetfield spoke to the WAAF radio station about what fans can expect from the stage production on the North American leg of the band's "WorldWired" tour, which launched last month. He said: "It's a huge stage. [When you're] our age and you've been around for thirty-six years and you're gonna do stadiums, go big."

The guitarist/vocalist added that he couldn't say for sure that it was "the biggest production" METALLICA has had so far, explaining: "I mean, when you say 'big'… I mean, we've done stuff where we've had two stages indoors and all kind sof crazy stuff. This, I would say, when you look at it, is the biggest we've done, as far as outdoors and just sheer size of it."

Hetfield also talked in more detail about the "WorldWired" stage set, which includes pyro displays that include forty-foot flames that turn into fireballs and fireworks galore.

He continued: "The whole idea around this is to make everyone feel as close as possible. That's what we've always done from day one — trying to get people drawn in. We wanna see facial expressions, we wanna see sweat, we wanna see the expression, the joy — everything that goes into making a show. So, on these big screens, if you're way up in the nosebleeds, normally you would feel like you're not a part of something. This, you're still able to count the nosehairs in Lars [Ulrich, METALLICA drummer] — whether you want to or not. You're up close and personal no matter where you are, and that's what we've been trying to do."

The summer stadium leg of the "WorldWired" tour — during which METALLICA is playing some venues with a capacity of more than 50,000 — kicked off at M&T Bank Stadium in Baltimore on May 10 and wraps up at Commonwealth Stadium in Edmonton, Alberta on August 16.

Later this year, METALLICA will head to Europe with a slate of fall arena dates planned through early November.