Guitarist "Metal" Mike Chlasciak (HALFORD, PAINMUSEUM, SEBASTIAN BACH) has been added to the list of artists who are scheduled to make guest appearances at the Chiller Theatre toy, model and film expo on October 24-26 at the Hilton Hotel in Parsippany, New Jersey.

In other news, Chlasciak has announced that he played on the track "I've Seen The Light" from the new Michael Vescera (YNGWIE MALMSTEEN, LOUDNESS, OBSESSION) solo album "A Sign Of Things To Come". He also contributed a guest solo to the song "Crashbreaker" from Chilean band DELTA. Mike says, "DELTA is a great metal band with a touch of prog. I liked their music as it also reminded me of one of my favorite albums from NOCTURNAL RITES called 'Afterlife'. Very cool band."

Chlasciak also contributed to the new book "Time Flies When You're In A Coma - The Wisdon Of The Metal Gods" by Mike Daly. Chlasciak says, "It's an interesting read with input from metal artists." 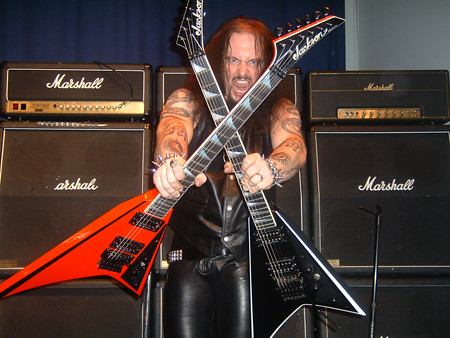