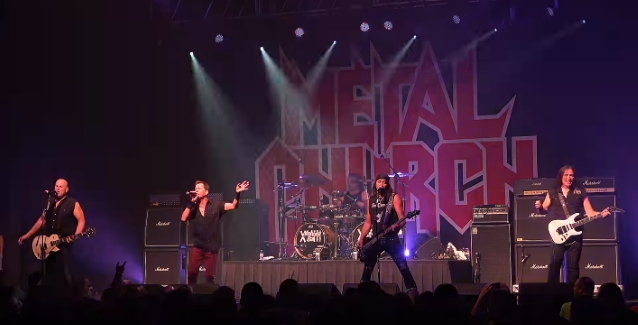 The first teaser for METAL CHURCH's upcoming album is available below. The follow-up to 2016's "XI" marks the band's first release since the departure of drummer Jeff Plate and addition of Stet Howland.

"XI" was issued in March 2016 via Rat Pak Records. Produced by guitarist Kurdt Vanderhoof and co-produced by Chris "The Wizard" Collier, the band's eleventh studio LP was METAL CHURCH's first since the return of singer Mike Howe.

Kurdt told Eonmusic that the response to "XI" exceeded the band's expectations. "As far as America's concerned, we charted higher than we ever have," he said. "There's some really great things about the new music industry for us now, because we do it ourselves, for the most part, and we do it at our pace without any pressure. There's very limited outside influence, and that was one of the things Mike wanted to check that out before coming back, which I totally understand."

Added Mike: "There was always something with the last albums that bothered us, and we'd look back and the record cover sucked, and the sound mix was not the greatest. Our songwriting we really liked, but it got pushed in ways that we didn't like, because of management and outside forces. So this was like we got to go back and do some unfinished business, and do an album all on our own, start to finish, from the creative part to the recording, to the mixing. Kurdt was amazing, and we know what we want METAL CHURCH to sound like and present to the crowd, and to the fans. This is the first album that we've ever been able to do that from start to finish and say, 'This is us — how we believe METAL CHURCH should sound and look, and act.' If it falls on its face, or if there's something wrong, then we can only blame ourselves, but at least we did it and we tried our hardest."