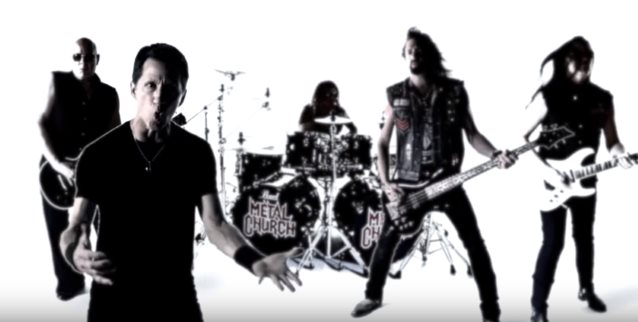 METAL CHURCH's video for the song "Reset" can be seen below. The track is taken from the band's latest album, "XI", which debuted at No. 57 on The Billboard 200, having shifted 11,000 equivalent album units in the week ending March 31, 2016.

"XI" was released on March 25, 2016 via Rat Pak Records. Produced by guitarist Kurdt Vanderhoof and co-produced by Chris "The Wizard" Collier, the band's eleventh studio release marked the return of singer Mike Howe.

METAL CHURCH has recruited Stet Howland (ex-W.A.S.P.) to play drums for the band on all its summer shows. He joins the group as the replacement for Jeff Plate, who announced his departure from METAL CHURCH in March.

Vanderhoof recently confirmed that METAL CHURCH has commenced the songwriting sessions for the follow-up to "XI", tentatively due in early 2018. "I actually have a big pile of new songs — demos — ready to go, and Mike [Howe, vocals] and I are gonna start putting it together and we're gonna try to start putting a new record," the guitarist told the "KDUX Morning Show".

Kurdt also spoke in more detail about the METAL CHURCH songwriting process, saying that it comes about organically. "The only way I approach writing a METAL CHURCH record is, does it sound like a METAL CHURCH record?" he explained. "I've never been one to try to take chances and break new ground with things; that's never been my kind of thing. I just wanna definitely keep it old school and heavy and powerful, but it's gotta be melodic; there has to be vocal melodies and notes and things like that. Things that some bands and people don't really do anymore, which is, I guess, fine, but that's not really something that I wanna listen to. So it's still gotta be musical. So I just kind of approach it that way — it's gotta be musical, it's gotta be melodic, and it still has to maintain power and be metal. But it's definitely old school — just kind of like 'XI' was."