METAL ALLEGIANCE will celebrate its fifth year of existence with four shows on the West Coast in April. These special four concerts will feature the core four members — David Ellefson (MEGADETH), Mark Menghi, Mike Portnoy (SONS OF APOLLO, THE WINERY DOGS, DREAM THEATER) and Alex Skolnick (TESTAMENT) — sharing the stage with Chuck Billy (TESTAMENT), John Bush (ARMORED SAINT) and Phil Demmel (MACHINE HEAD). Returning to the METAL ALLEGIANCE live show ranks after a three-year hiatus is Grammy Award-winning vocalist/bassist Troy Sanders (MASTODON). Each night will offer a unique experience as with any METAL ALLEGIANCE show, you never know who will drop by to join the festivities. For the April 17 show in Phoenix, the band will be joined by Max Cavalera (SOULFLY) whereas the April 20 show in San Francisco will include Steve "Zetro" Souza (EXODUS) and Gary Holt (SLAYER, EXODUS). Opening the four nights are SUPERFIX and WEAPONS OF ANEW.

"Five years already?" comments Menghi. "Geez… when I thought of the words 'METAL ALLEGIANCE' in my local taco joint and the skeleton of a concept, I never imagined MA becoming what it has become. Only a few short months after that, we were on MOTÖRHEAD's Motörboat cruise and on that boat the future of MA as I knew it (well not at the time) is when everything changed as we thought, 'Hey, let's write some music together.' Well… two full-length albums, an EP and many memorable shows later, we're still intact and stronger than ever. I look forward to celebrating with everyone and hope to see many old faces and new ones at these special shows. Each gig is going to be different with some surprise guests planned for each city. In true MA fashion…Ya never know who is gonna show up?!?!"

Skolnick states: "It's hard to believe it's been five years! While MA has had some memorable one-off concerts recently, tour dates have been relatively rare due to schedules. Now the stars have aligned to make this run of shows possible, including a strong lineup that's touring together for the first time, some great venues and very special guests. Come celebrate with us!"

"Most bands barely survive one album and a tour," comments Ellefson. "So to go from our debut all star jam on Motörboat in 2014, to having full-length releases and accompanying world tour dates under our belt, five years has packed a big loud punch from METAL ALLEGIANCE. I think it shows that great music and friendship have always been at the heart of METAL ALLEGIANCE so this five-year milestone finds us a perfect celebration for just that!"

Portnoy comments: "Five years of hanging, jamming, thrashing, ball crushing and ball busting with this wrecking crew! I love being able to write, record and perform this music with these guys...it's always a blast!"

General admission tickets for the show will be available on Friday, March 8 at 10 a.m. Pacific. 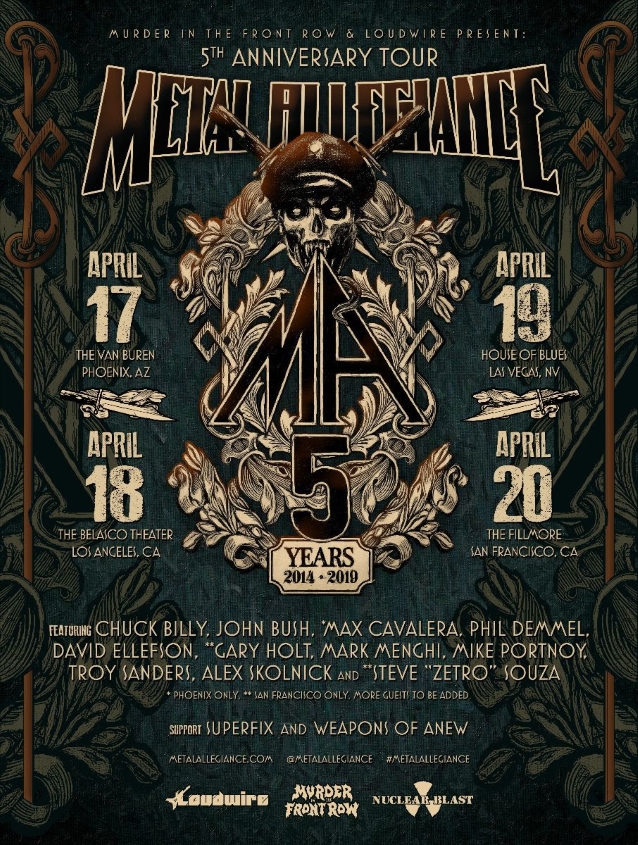