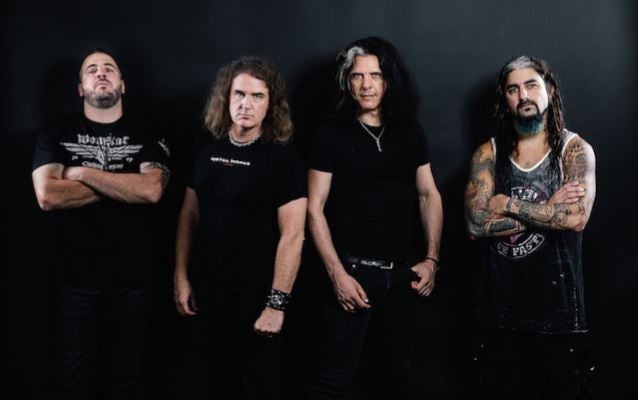 METAL ALLEGIANCE will return to Anaheim, California at the House Of Blues on Thursday, January 25 for its annual January metal assault. This year marks the introduction of Bobby "Blitz" Ellsworth (OVERKILL) and John Bush (ARMORED SAINT, ex-ANTHRAX) to the group in addition to surprise guests that METAL ALLEGIANCE is known for.

The night will be sponsored by Musicians Institute and "Murder In The Front Row" book and forthcoming documentary and will include direct support from Nuclear Blast Entertainment labelmates WEDNESDAY 13. Opening the night are SUPERFIX and a special Musicians Institute-formed band.

General admission tickets for the night will go on sale on Friday, October 27 at 1 p.m. EDT / 10 a.m. PDT and can be purchased here.

VIP packages that include the following will also be available:

Menghi comments: "SoCal should prepare for a full thrash assault. We've assembled a band that includes some of the Bay Area's finest mixed in with the East Coast thrash attack while adding a sprinkle of L.A. and a dose of Brazil. This show is going to be a no-frills, no-bullshit throwdown. With all that's going on in the world, down to our personal lives, a statement needs to be made and thrash is in all of our hearts, so no better place to do it than with our friends in Southern California."

Adds Portnoy: "We've been doing METAL ALLEGIANCE shows in Anaheim at the end of January almost every year and it is always THE metal event of the year. Each year the show gets bigger and better and I look forward to another metal extravaganza in January!"

"The January gathering of METAL ALLEGIANCE friends in Anaheim has become an annual tradition, with each concert promising a special lineup and set list that's different from before," comments Skolnick. "This time around, we have an abundance of fresh original material to add to the mix, as well as familiar classics, and it's always a fun time. Join us if you can!"

Bush says: "Real excited that I'm jamming with the METAL ALLEGIANCE guys for the upcoming show at the House Of Blues. I'm breaking my cherry! See you all there."

Ellefson states: "It's time for our annual metal summit in Anaheim. With new songs and album in the works, we're looking forward to bringing the tribe back together to celebrate all things metal in January!"

Osegueda says: "I always look forward to playing with all my brothers and sisters involved in METAL ALLEGIANCE. But the show that I look forward to playing with them the most every year is the METAL ALLEGIANCE show in January in Anaheim! Always an amazing set! Always special guests! And always a guaranteed unforgettable night for everyone on stage, and in the crowd! Once again I am honored, and excited to once again be a part of it!"

Adds Kisser: "I'm very happy to jam with METAL ALLEGIANCE again in January 2018. Always great vibes with amazing musicians and playing the music that inspired all of us to be metal warriors today! A lot of fun! Long live METAL ALLEGIANCE!"

"We are really excited and looking forward to being a part of this year's METAL ALLEGIANCE show in January 2018," comments Wednesday 13. "This will be such a different audience for us, and we are excited to be included alongside such legendary musicians. It's gonna be a great show."

Stemming from an initial idea in 2011, METAL ALLEGIANCE was born as a way to unite a collection of hard rock and heavy metal's most notable musicians in a setting born under one ideal — a love of music and performing. In 2017, that ideal still holds true and has become the foundation for everything METAL ALLEGIANCE; furthered with the release of their debut album and "Fallen Heroes" EP. While the lineup may change, the passion, the energy and the emotion all remain the same. 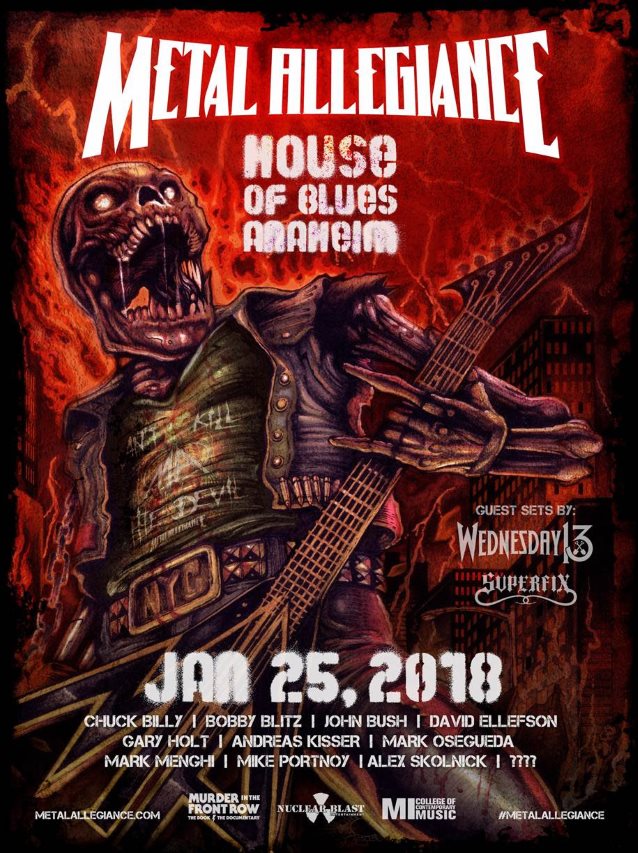