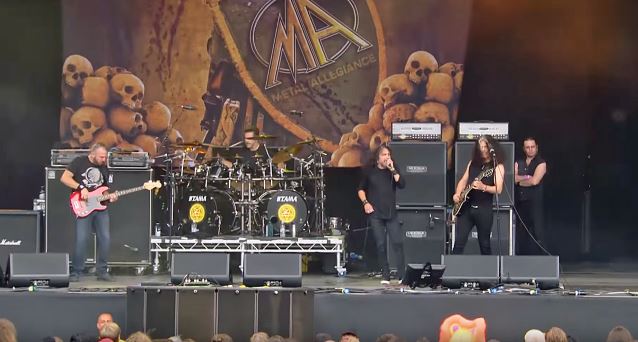 Professionally filmed video footage of metal supergroup METAL ALLEGIANCE's entire performance at this year's edition of the Bloodstock Open Air festival can be seen below.

Benante was filling in for regular METAL ALLEGIANCE drummer Mike Portnoy, who was on tour with TWISTED SISTER and was unable to make MA's Bloodstock show.

METAL ALLEGIANCE released a special EP, titled "Fallen Heroes", on August 12. The band united to pay homage to the three legends — Lemmy Kilmister, David Bowie and Glenn Frey — who impacted not just their lives but the world as well.

Brought together by METAL ALLEGIANCE principal partner Mark Menghi, the project's original material came together from the creative minds of David Ellefson (MEGADETH), Mike Portnoy, and Alex Skolnick, alongside Menghi. The four writers then reached out through their metal rolodexes to a diverse lineup of performers, each adding their own personal musical stamp to the collection of nine original songs.