Swedish extreme tech-metal pioneers MESHUGGAH have announced European tour dates for November and December 2021. The trek will kick off on November 19 in Vienna, Austria and conclude on December 13 in Hamburg, Germany. In addition, the band has announced a one-off London show at the prestigious Royal Albert Hall on June 3, 2022. Special guests on the dates, except for the Oberhausen show, will be ZEAL & ARDOR.

Tickets will go on sale on Friday, December 18.

Two months ago, MESHUGGAH drummer Tomas Haake confirmed to Knotfest.com's "Mosh Talks With Beez" that the band has spent much of the downtime during the COVID-19 pandemic working on material for a new album.

"Since March, we all kind of separated, and Jens [Kidman, vocals] took all his stuff and started working from home," he said. "And me and Dick [Lövgren, bass], the bass player, we usually work a lot together, but he also worked separately since then. But at this point, we're back together, and we're trying to hammer it out."

According to Haake, working remotely hasn't posed any huge any problems for him and his bandmates so far.

"By now, Internet is so fast, even huge files — like gigabyte files — you can just send 'em back and forth; it's not really a big problem," he explained. "So we've been able to keep working. But it's still at a fifth or a tenth of the pace that you normally would have when you're working together [in person]… Just changing one riff… Every single little thing you're trying to do or adjust within a song or an idea takes days instead of maybe hours when you're sitting together at the studio.

"If you're a band that kind of jam up stuff or you kind of write together as a band in the rehearsal space or whatever, it would obviously be very different, if you can't do that. We're not really that type of band, and we haven't really been that type of band since the early '90s, mid-'90s. So for us, it's not that big of a deal. We write separately a lot of stuff. And Mårten [Hagström, guitar], he lives up north — he works at home on his stuff. Me and Dick, the bass player, we work on stuff here, usually together. Jens works separately from us and so on.

"Since we program drums — that's kind of how we do demos nowadays. We don't go into the studio and record demos, like we used to. So for us, programming drums and recording into the computer and doing it that way, that's kind of how we've been doing it for so long now. So, fortunately, I would say, this hasn't really hampered us that much, other than just the time aspect of things."

Speaking in more details about the MESHUGGAH songwriting process, Tomas said: "It does take us quite a bit of time with each album. And we're also very easily distracted. We don't write on the road. Some bands, you see they have gear set up in their bus and they're constantly writing. We're not that type of band. We really need to just have time completely off and preferably not even a gig date in the calendar. That way, we can kind of relax and get into the writing and get into that modus."

Asked how far into the writing process for the new MESHUGGAH album he and his bandmates are at the moment, Haake said: "I think we have most of the material for the new album. It takes a long time for us between each album, and this time, due to COVID as well, it's gonna be longer than usual, I think. Right now, we're aiming at a release in late '21. Then the question mark right now is, is touring even gonna happen at that point? And if not, do you release the album or do you hold off with it and try to make money some other ways, like doing live shows on the Internet or whatever? So, yeah, it's time consuming, for sure. We tend to scrutinize everything we do a lot, too, so… I think, to some degree, you just turn kind of insane over time when you try to do this thing, because we always try to challenge ourselves and we always try to find something that [we] haven't done before. But we've done this for 30 years now, so it's harder and harder to find what's special with this — like, 'This riff, is it cool enough? Or what's going on?' So you tend to kind of overly scrutinize things. And sometimes you just kind of paint yourself into a corner with that kind of thinking. And sometimes you even realize, 'I can't even listen to this. Why would we release anything like this? It doesn't even make sense.' So you have to find kind of a balance. What's a good balance of a song or an album as far as technical aspects? And what do people wanna hear? What do we wanna hear? And hopefully we can get to some kind of good level of mix in that. But that's always an aspect too. And definitely with the years that we've put into it, we definitely feel like we're more and more locked. It just gets more and more narrow. With each album, you're just kind of in a tighter and tighter space."

Regarding the musical direction of the new MESHUGGAH material, Tomas said: "Of course, we have a certain framework that we still wanna sound like MESHUGGAH, we wanna have that signature sound, we want people to be able to — even if they haven't heard the song [before] — in the best-case scenario, it's, like, 'Oh, that's gotta be MESHUGGAH,' even if it's a brand new thing. So hopefully that's something we're aiming at. But with that said, as far as the music goes, we try to [do] kind of the opposite of what AC/DC has been doing for 40 years. So we're not trying to write the same album over and over. And whether we succeed with that or not, that's more up to our fans and other people, but that's definitely the aim. We try our best to kind of find new grips within the framework of what we're supposed to be, I guess. 'Cause we don't wanna really step out of that either. We're not looking to be another band all of a sudden or something that we haven't been or that is not true to kind of what we're doing."

"The Violent Sleep Of Reason" came out in 2016 and resulted in a "Best Metal Performance" Grammy nomination for the song "Clockworks". The disc was produced by the band and was engineered by Tue Madsen of Puk Studios in Kaerby, Denmark. 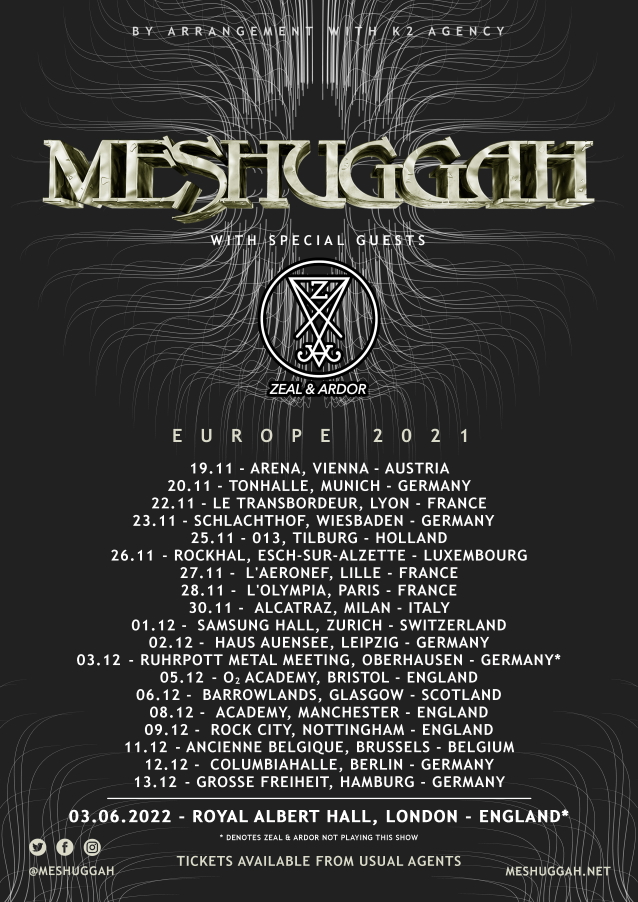